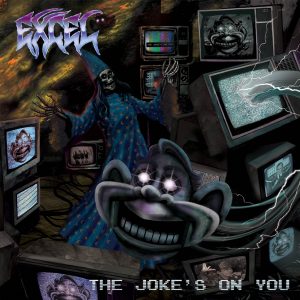 Venice Beach maestros Excel’s second album gets the deluxe reissue treatment from Southern Lord. In fact this is the second time around I’ve received a promo copy of the album, having originally got the LP when it came out on Caroline records in 1989 for review for my old metal zine! Back in 89, this record was pretty much at the forefront of what was happening crossover-wise. Just like the fast hardcore and thrash metal bands of the time, outfits like Excel were starting to really flex their musical wings.

Whilst their original recipe was a potent mix of gnarly hardcore and metal, this revamped style features bags and bags of riffs inspired by the likes of Led Zep, Sabbath, COC and Hendrix in addition to the original punk-metal hybrid. You can hear the sun-soaked Venice Beach style throughout, but Excel were no mere Suicidal copyists and developed their own take on the sound right from their early days.

There’s a lot of mid-paced stomping going on, as they build chunky guitars on top of one another but they never letting the listener get bored as Excel are also more than happy to press down on the gas pedal, open up the throttle and let loose with some classic Venice style thrashing. There are parallels with lots of bands from the same era and for some reasons the names Exodus, Anthrax and the underrated Zoetrope spring to mind, as there’s a more metal than hardcore approach on this album, but overall I have to say that The Joke’s On You has really stood the test of time and remains extremely listenable and incredibly enjoyable. Repackaged in a new sleeve that picks up the theme of the original, and featuring Blaze Some Hate as a bonus track, this is a reissue well worth checking out. Tom Chapman