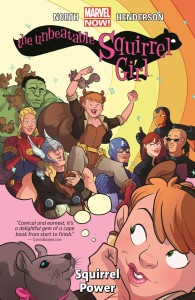 The Marvel Universe’s most unstoppable heroine has everyone going nuts! She’s taking the world by storm, garnering attention from all corners of mainstream media and now is your chance to catch up on her critically acclaimed adventures!

Find out why with THE UNBEATABLE SQUIRREL GIRL VOL. 1: SQUIRREL POWER, available now in comic shops and wherever books are sold! Now is the time to bring home the series everyone is talking about. Don’t believe us? Here’s what the critics have to say:

“If you’re looking for pure joy in comics form, run – don’t walk – to your local comic shop to pick up a copy of the newly-released trade, The Unbeatable Squirrel Girl Vol. 1.” – The Mary Sue

“Witty and wise, funny and fast, each page and panel is sure to crack even the most stone-faced smile.” – IGN.com

“A title that is as brilliantly and simply steeped in Marvel continuity as any out there while still feeling completely fresh and inviting.” – Sktchd.com

“It’s a comic that wants to keep readers smiling: It’s not laughing at superheroes, but laughing with them, even as it reminds us of the extraordinary things they can do.” – Slate

“If you’re looking for a comic that you can share with anyone or that will cheer you up after a major bummer of a day, this is it.” – ComicBook.com

Thanos, Doctor Doom, Galactus — Squirrel Girl has beaten them all. And now she’s taking on her toughest challenge yet – college! From the creative team of Ryan North, Erica Henderson and Rico Renzi – be there for the beginning of the nuttiest and most upbeat superhero of them all! Catch up on her adventures as she eats nuts and kicks butts across the Marvel Universe in THE UNBEATABLE SQUIRREL GIRL VOL. 1: SQUIRREL POWER, available now! And don’t miss THE UNBEATABLE SQUIRREL GIRL VOL. 2: SQUIRREL YOU KNOW IT’S TRUE coming in December!

Plus, Doreen Green’s monthly adventures continue this October with the all-new UNBEATABLE SQUIRREL GIRL #1 – a perfect jumping on point!