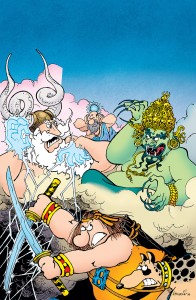 This twelve-issue limited series features a tale told by the same award-winning creative team as always: Sergio Aragonés and Mark Evanier, with Tom Luth coloring and Stan Sakai on the lettering pen.

The gods did not bless Groo with brains, only with the ability to battle. Now, they themselves are in conflict over the spirit and future of mankind…and it is Groo who becomes the pawn (unwitting, of course) in their war. If the future of humanity depends on the Wanderer—we’re all in a lot of trouble.

“[Aragonés’s] style is so established, cartoony, and consistent that there’s never a doubt that you’ll get anything but pure magic out of him.”—Multiversity Comics

“Longtime Groo fans will find a lot to love here.”—Newsarama