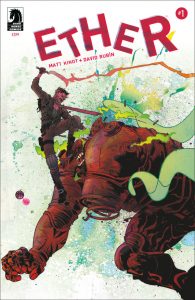 Ah Venice, a beautiful setting for a comic book. Not that I’ve ever been there, but I hear it’s great. New York Times bestselling Mind MGMT creator Matt Kindt and Black Hammer‘s David Rubín have collaborated on this fantasy adventure about Boone Dias, a science-minded hero intent on sustaining the balance between Earth and a magic world known as The Ether. For reasons yet known to us, Dias and agency known as the CES, are able to see breaches between the Earth and the Ether and repair said breaches. Plucked from incarceration by the CES just as portals between the worlds are beginning to crack, Dias must make peace with his estranged family and once more venture to the Ether to stop the threat of the copper golems and save both worlds. With the help of a purple gorilla a grumpy, spell-writing fairy; and a bull-headed, motorcycling spell-hacker from the Ether, our heroes set off on an epic quest taking us through the center of volcanoes, deserts full of living mummies and sphinxes, and a bizarre fairy forest.

The essence of Boone Dias’s character, lies somewhere in between Indiana Jones and Egon Spengler; a man who lives for the adventure, even at the expense of his family life, but with an eye for the scientific and supernatural. The weird and wonderful characters in the Ether are fantastic and well thought out, like Enid Blyton on a particularly nasty acid trip and I like the way that the book keeps us on track with the artwork clearly depicting whatever part of the universe we’re looking at, with the Earth drawn superbly in a very modern comic book style, similar to that of The Walking Dead’s Tony Moore and The Ether favouring retro comic artwork. An encouraging start for what looks to be a very promising new series… Chris Andrews