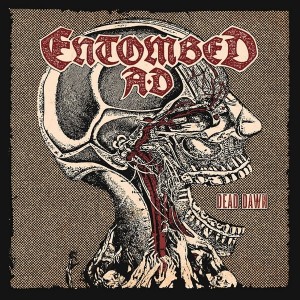 Thankfully Entombed A.D. seem to be walking down the left hand path again. LG and the boys are, with this record, once again favouring the leaner, rawer, old school Entombed sound, as opposed to the fabricated death n’ roll vibe of later releases. ‘Dead Dawn’ hits you like a smack in the face and their return to a more simplistic style will certainly please many old school fans, as hard hitting opener ‘Midas In Reverse’ crushes any doubts about where the band are heading, and what they’ve set out to accomplish, on ‘Dead Dawn’. ‘Down To Mars…’ is a perfect example, as it encapsulates everything this record is about, it’s gnarly groove and weighty crunch being built around an almost addictive hook that doesn’t detract from the pure malevolence that it excretes and oozes. Entombed have cranked up the dark guitars and haven’t held back on the ferocious vocal assault. ‘Dead Dawn’ Entombed A.D. at their best. Mark Freebase

In their long career Entombed, or Entombed A.D. as they now call themselves have always been leaders not followers. Having more or less laid down the blueprint for the Swedish death metal style they then pioneered the death’n’roll sound on “Wolverine Blues” and have never really looked back since. Over 25 years after their debut album, Entombed A.D. don’t necessarily feel the urge to recreate the wheel once again, but instead choose to reference their past glories in creating this new album. There is something of a back to basics approach on here and the result is a modern death metal classic-in-the-making. This is heavy in all the right places, with haunting intros and melodic passages all topped by L.G. Petrov’s distinctive guttural vocals. Most of the songs are between 3 and 5 minutes long so what you get is short bursts of harsh metal executed with skill and style. Without worrying about getting overly technical or muso, Entombed A.D. have delivered exactly what is needed. Tom Chapman