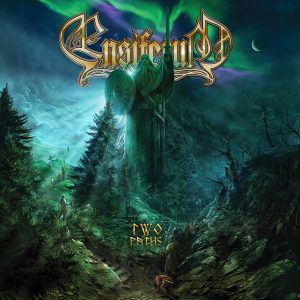 One of the longest running debates within the global Heavy Metal community concerns the individual or individuals who deserve to wear the crown and govern the scene as it’s king(s). While Manowar have long seen themselves as the self-proclaimed “Kings of Metal”, few rivet heads outside of Germany and Greece agree with them; with the majority of my denim and leather clad brothers and sisters usually opting for safe, but nonetheless deserving choices such as Ronnie James Dio, Rob Halford, Ozzy, Maiden or Metallica. And while I can see the merit in those choices, I’d like to throw an unusual contender into the quest for the metal throne and as such, nominate Ensiferum.

While comparatively short in tooth and global stature when compared to their rivals, for the last two decades they, and their music, have epitomised everything that is metal. They are, as Nigel Tufnel might say, ‘none more metal’. And Two Paths finds the band ploughing their metal furrow in fine form, being comprised of a mixture of insanely aggressive and catchy riffs, rhythms that smash the air from your lungs and make your heart beat a little faster and songs that are so immediate that you’ll find yourself singing along to them whether you want to or not, while your veins and head are pounded into shreds by the mixture of adrenaline and endorphins flowing through them at, thanks to Two Paths, ten times the normal rate. Embracing traditional metal and Viking (and yes, Vikings are metal. They “discovered” America*, the days of the week are named after, and for, their pantheon and they had awesome beards. That makes them metal) themes into their lyrics, while seamlessly fusing folks and traditional Finnish music into their savage and brutal metal onslaught, on (and with) Two Paths Ensiferum have proved that they deserve to walk in the company of Titans and Gods, and have earned the right to sit on, and govern from, the metal throne. Long live the Kings, long live Ensiferum… Tim Cundle

*It’s true. Look it up. Do the Googles thing.