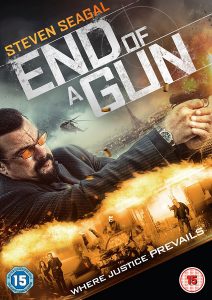 I think the first thing to realise about Steven Seagal’s latest movie End of a Gun, is that before you view it, you know it’s not going to be winning any awards. That said, some of the greatest movies ever made, never won any awards, so it’s not a given that this movie is going to suck, you just don’t hold much expectation. With that out of the way, I can begin.

It’s a pretty run of the mill plot, for somebody of Seagal’s vintage, he’s playing a retired federal agent who whilst in Paris saves a girl in peril and upsets a drug kingpin in the process. The girl in question is British T.V bit part actress Jade Ewen, who has grabbed this opportunity by the ponytail turning in a pretty good performance as the former girlfriend of a drug pusher. Romanian actor Florin Piersic Jr is utterly believable as Gage, the cold blooded bad guy while Seagal himself, puts in his usual Seagal performance. Love him or hate him for it, his laid back approach has clearly worked for most of his career, so why stop now?

The first half an hour is enjoyable fun, you get to see Seagal, do his thing in the first 5 minutes, which is very satisfying and although it’s not as high octane as it used to be, he can still kick ass without removing his sunglasses or exuding a bead of sweat. The action is then subdued slightly, until a blockbuster finish.  The dialogue isn’t great, but the actors do a commendable job with it. The storyline is carried along by Segal’s internal monologue, in a Sin City kind of way, serving to tell us, what his acting can’t and some of the back story is told in clips in the same way Quentin Tarantino does so well. The soundtrack works well. That typical jazz/horns background music, so often associated with French movies, provides the perfect accompaniment to the movie’s Paris backdrop

Like I said, this movie won’t win any awards, but if you like Seagal, then you’ll know what to expect and you’ll dig this movie... Chris Andrews