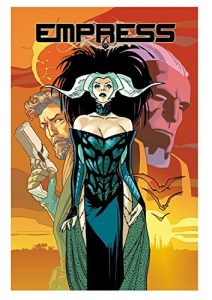 It’s been a while since I’ve spent any time with a Mark Millar book (the last one being Kingsman), and I’d nearly forgotten just how consummate a storyteller he was.  Then I started reading Empress, and within five pages, I remembered why, exactly, I dig the hell out of anything and everything that he’s responsible for creating: because he knows how to spin a captivating tale. He knows how to mould and fashion interesting, fully rounded three dimensional characters, has an instinctive and intuitive feel for, and ability to craft believable, immediate dialogue, and knows exactly how to incorporate both into gutsy, potent plots that capture the imagination. And that’s exactly what he brings to, and does with, Empress, a galaxy spanning, space opera set in the distant past.  It’s the story of a family fleeing the grasp of an abusive husband and father  who will stop at nothing, and let no-one get in the way of getting his errant wife and children back and who just happens to the be the ruler of the known Universe.

Empress is a flat out, full speed ahead adventure that hops from one planet to another and throws the escapees into one nail biting, danger filled scenario after another as they try to stay one step ahead of their psychotic pursuer.  Built around a richly detailed mythology and lore that postulates that history is an ever repeating cycle and that civilisations have risen and fallen on Earth for countless millions of years, Empress incorporates everything from teleporting robots, to dinosaurs, to unscrupulous alien mercenaries and more into its space battle filled, action packed plot that thanks to the always magnificent artwork of the ever dependable Stuart Immonen looks every bit as good as the story it brings to astonishing life reads. It’s Mark Millar doing what he does best. Taking an everyday situation and twisting it upside down and inside out until it becomes something that’s outlandish, fantastical and fabulously original. And if that wasn’t enough, despite the fact that he drip feeds the reader clues throughout the book, he still manages to end this chapter of Empress with a “Well, hot damn I didn’t see that coming” sting in the tail. Mr Millar, I salute you… Tim Cundle