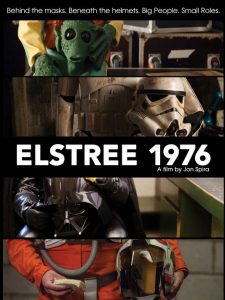 It all began a long time ago, in a studio far, far away. Nineteen seventy six was the year that everything changed. It heralded the dawn of a new cinematic age, launched the biggest franchise in film history and began a journey that would inspire the imagination and wonder of every generation that followed in its wake. It was the year that George Lucas began filming Star Wars and while the main cast were already in place, the director still needed extras and actors to fill out a number of the supporting roles.  Elstree 1976, is the story of nine of the men and women who became, on screen at least, Stormtroopers, alien waitresses, Rebel pilots and guards; Greedo, Darth Vader and the most infamous bounty hunter in Science Fiction mythology, Boba Fett.  While Jeremy Bulloch (the man who sold Han Solo to Jabba) didn’t turn up until The Empire Strikes Back, making his inclusion a little odd given the subject of the film and its title, he is a more than welcome inclusion. His dry wit and self-deprecating humour lend him a sense of charisma that can’t help but make you smile and it becomes immediately apparent why he’s such a firm favourite on the convention scene.

Each of the actors lives was irreversibly changed by the Summer of ’76 and their involvement in the film, and while none of them, apart from Dave Prowse, are exactly household names (unless you’re a bit of a geek like me and you instantly recognise Angus MacInnes, or as he’s more commonly known Gold Leader, Hellboy’s Sgt Whitman and Judge Dredd’s Judge Silver) they each have a wonderful story to tell about how they came to be a part of Star Wars, their lives leading up to, and after the film(s) and their continuing association with the franchise through their active participation in fandom.  Rather than completely submersing itself in Star Wars, Jon Spira’s thoughtful, studied film focuses on its subjects and allows them to tell their stories, warts and all, in their own words. Whether it’s the pitfalls, trials and tribulations of treading the convention circuit, the time they spent on set, falling out with George Lucas, how they felt about the film then and how they feel about it now, or the tales of the strange and often disparate paths, both in out and out of the film industry, they’ve followed, you can’t help but become engrossed in, and captivated by, their lives. Elstree 1976 isn’t an action spectacular, but it is a life affirming, gentle examination of the way in which a single event can forever alter someone’s destiny and change the course of their life. After all, there’s no such thing as a small part in the one of the biggest films to have ever graced the silver screen and everybody who played a part in it has a story to tell; and each and every one of them adds something magical to the legend and mythology of the grandest space opera of them all.  The Force is strong with this one… Tim Cundle