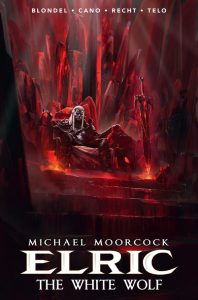 After being sucked through The Crimson Gate at the end of the first issue, Elric and Smiorgan now find themselves shipwrecked and battered in what they believe to be Melnibone.

With Vassliss and Smiorgan looking on helplessly, Elric is dragged down into the depths of the earth by the vengeful spirits of the ghost city. Greeted below by an isolated and vengeful Saxif D’Aan, Elric finds out that his black (sword) magic is no good here, and his only option is make nice with the angry sorcerer who has caged himself into his fabricated version of The White Wolf’s home.

After having his one true love (it’s always their one true love…) cruelly snatched from him by Mabelode, his former employer, Saxif doesn’t even believe that Vassliss is her reincarnation, until she throws herself in a flaming pit, obviously. When the heartbroken wizard follows her in, Elric and Smiorgan are left to make a hasty escape from the crumbling underworld.

Spewed back out of The Crimson Gate into the churning ocean, this time without the ship they rode in on, the castaways are rescued by Avan Astran and his crew, who informs them of the price on his head. As dragons swarm the sky above, presumably searching out the exiled Emperor, we find out that his very own jilted Cymoril now sits on the Ruby Throne, preparing to punish him for abandoning her. And as we all know; hell hath no fury like a woman abandoned in order to be protected from dark curse.

The pages snap and crackle with black magic, monsters, and Cymoril cuts a terrifying figure reigning from the Ruby Throne in the last panels. The cover by Gary Jamroz-Palma (Kingsglaive: Final Fantasy XV) absolutely glows with vicious red, and the alternate featuring Cymoril on her throne is so powerful that if you turn off the big light and lean right in, you can almost hear Mars from The Planets playing in the distance. Another yes from me. Sophie Francois