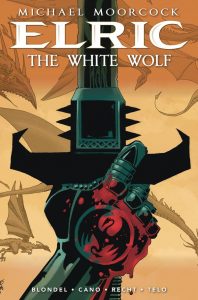 Based on the Michael Moorcock novels and first appearing as a character in the early 1960s, Elric: The White Wolf is the latest in the comic series charting Elric’s journey away from Melnibone, his lady love Cymoril, and into the unknown.

Wielding Stormbreaker, his black, soul-eating sword, and tied to its mystical cannibal whim, Elric leaves his throne, fearing he’d trigger an ancient prophecy ending in the destruction of everything he loves.

After slaughtering a slave merchant and his men at the famished behest of Stormbringer, Elric meets Smiorgan, a potty mouthed sailor, who pledges himself to serve Elric until the debt of his freedom has been repaid – which as we all know, is how all the best team ups start.

Along the way, Elric is summoned by Vassliss, a wealthy heiress, who claims she will pay them both handsomely if they can take her to the Crimson Gate to meet her lost lover. The Crimson Gate not only requires Elric himself to open it, but obviously turns out to be a blood-soaked cyclone in the middle of the sea. There we are left gagging for the next issue.

Almost no previous knowledge of Elric’s earlier adventures is required in order to enjoy this rich and exciting new story and the amazing artwork of Julien Telo and Robin Recht drips off the page with so much blood and ocean, you can almost smell the salt. An awesome comic, drenched in adventure, action, magic, and of course a touch of tortured romance for good measure. Sophie Francois