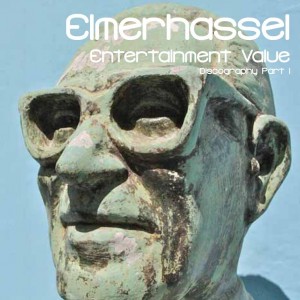 Elmerhassel – Entertainment Value: Discography Pt. 1 CD/ Elmerhassel – Self Analysis: Discography Pt. 2 CD (both Boss Tuneage)
Oddly enough Elmerhassel were active during the period that I was happily listening to this type of homegrown melodic punk/ hardcore, but for some reason they completely bypassed me, bar the odd appearance on a compilation. All the more strange is that I loved bands of a similar genre, whether it’s UK bands such as Sink and Perfect Daze, or the US bands like Freewill or even the Lemonheads. If Boss Tuneage were to have presented this as a brand new band I don’t think I would have noticed – apart from a couple of the songs somehow sounding vaguely familiar. They play an excellent version of that timeless style that bridges the gap between melodic hardcore and independent rock, as did the bands already mentioned. One thing they managed which not that many did, was to keep their style consistent throughout their lifespan. They didn’t start out sounding like Napalm Death before ending up like Neil Young – the sounds is pretty similar from the first disc through to the second, which is why I’m reviewing both together. Both feature that style that bands like of Husker Du pioneered, but so many UK bands have since adopted and made their own. There aren’t many cover songs on here, but the fact that they chose to cover “Swann Street” by DC’s Three is a sign of quality and good taste, and that alone tells me that I’d like these guys. I have to say I’m not a completist by any means, so I’d have been happy with a compiled “best of”, but for fans of the band and genre, both discs are well worth lending an ear to. Tom Chapman