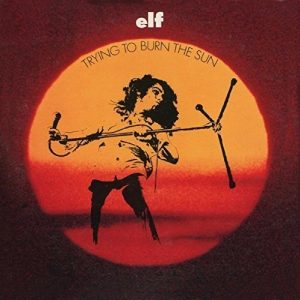 Trying To Burn the Sun was actually first released in 1975, after the band had split up when Ritchie Blackmore pinched four of the five band members for his initial Rainbow line-up.  This third and final Elf album encompassed a completely laid-back, rock n roll feeling – easy on the ears, but groovy. Fans of the new wave of classic rock – Temperance Movement and Blackberry Smoke et al, should really check it out. Very poignant in delivery, yet very powerful due to Dio’s performance, the musicianship has real depth for a seventies band. Although it lacks a little of the power of Elf’s previous albums, Trying To Burn the Sun has an aura of rebelliousness to it, and as such, it shouldn’t be overlooked or viewed as just another seventies rock record. Ronnie’s commanding voice makes sure of that. With just over thirty-six minutes of swagger, and a decent production job, songs like Black Swampy Water, Shotgun Boogie and the insanely bluesy come reckless rocker Streetwalker don’t sound at all dated like so many of the Elf’s contemporaries do. And once again fans old and new will welcome the abundance of literature and authentic photos spread throughout the twelve-page booklet. If you missed out first time around, then it’s time to rectify that mistake…  Mark Freebase