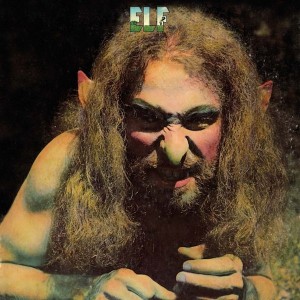 Elf featuring Ronnie James Dio CD (HNE Recordings/Cherry Red)
The likes of Rainbow, Sabbath, and Dio (the band) will always be talked about in the surroundings of rock and metal, where as Ronnie’s first band Elf has always taken a less prestigious place throughout. Most probably caused by lack of knowledge… or maybe even ignorance, possibly even trends. However this debut album is monstrously good and can stand on it’s own as a point of attention for the said vocalist’s career. The unmistakably classic deliverance of Dio’s talent is present here in all ways, and a rumblin’ groove satisfies all that you may know already… it’s honestly not a million miles away from the above mentioned bands, and one can truly understand why Mr Blackmore gave RJD the frontman’s job in his new outfit. Eight songs with feel, power and dynamic, not an incline of washed up commercialism that one could expect from this 1972 self titled debut album – it was definitely the foundations that set a solid point from which the great man was to start his legendary sound. Every band RJD has resided in, has it’s own remarkable vocal resonance. Elf would sit comfortably amongst the likes of the New Wave of Classic Rock… Blackberry Smoke, The Temperance Movement, and their throng of contemporaries; ‘Hoochie Koochie Lady’ and ‘First Avenue’ make sure of this, whilst also mustering the powers of the latest Heaven And Hell album, or any Dio opus, courtesy of ‘Never More’. With production from Roger Glover and Ian Paice (Deep Purple fame) this self-titled record is quite possibly a missed gem for many people around, so you could even learn a bit from the accompanying booklet. Hopefully HNE will re-issue the remaining two Elf albums, as if as prominent as this, it’s a seriously good investment. Fans of the new wave of classically inspired rock will relate to it very well. Mark Freebase