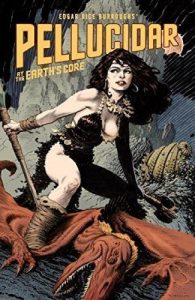 It’s no good. Every time I read the name Abner Perry, I see Peter Cushing. Similarly, with David Innes, it’s Doug McClure. For like many of a certain age, my overriding Pellucidarian imagery remains that of the 1976 Amicus fantasy, At The Earth’s Core. In common with its filmic cousins – The Land That Time Forgot and Warlords Of Atlantis – also starring Troy Doug McClure  it was, frankly, a wee bit bollocks, but the mid-seventies was the tail-end of desperate times for cinema-going fantasy fans, and we clutched at straws. Okay, okay, actually we wanted to clutch at Caroline Munro, but we were a bit too zitty at the time.

But even had I known that Caroline Munro would eventually, erm, ‘flesh-out’ the form of Dian The Beautiful, Princess Of Amoz, I doubt it would have bolstered my enthusiasm for a series I liked well enough but never quite got on with. While in their bookish forms I embraced Tarzan’s jungle and John Carter’s Mars, Burroughs’ subterranean world seemed somehow lacking – an environment inhabited by cast-offs of better ideas, a dumping ground for everything that didn’t work in his other tales. The prehistoric dynamic is fine, but where Burroughs expanded on that melting-pot, with the psychic Mahars and gorilla-like Sagoths, they seemed for the most part about as convincing as those made-up creatures on the kinds of bubble-gum cards proliferating at the time, Mard-arse Monsters! or some such.

So – when DC Comics adapted the first Pellucidar tales in the early 70s, it was one of the few comics I flicked through on the spinner but neither bought nor read. The series didn’t have the most auspicious of starts, anyway, its first chapter appearing in the pages of Korak: Son Of Tarzan, before abruptly transferring to the new title gathering Burroughs adaptions, Tarzan Presents (ERB’s) Weird Worlds. That the premiere issue didn’t even bother to reprint the debut but featured chapter 2 with a lengthy recap struck home the fact there didn’t seem much commitment to the Len Wein/Denny O’Neil scripted adaption. It felt like a filler in search of a home. Also, unusually for Wein and O’Neil, it read as a horribly rushed job.

Admittedly, there’s not a lot Dark Horse’s re-release of the material can do about that. But in seeing this stuff again for the first time in years, there does seem to be a similarly odd lack of commitment in its presentation of it. Don’t go looking for any introductions or interviews or art galleries here – all you get are the comics with art chores shared by Alan Weiss, Mike Kaluta and Dan Green, reproduced with an oddly blurry colour palette and occasional faded lettering. It may be that Dark Horse didn’t have access to the original artwork but, even so, you’d expect a digital tweak or two here and there.

Priced at $12.99 and $17.50 for the American and Canadian markets, my copy didn’t have a UK price, but, as I’ve said in an earlier ‘graphic novel’ review, if you were so inclined, you could probably pick up the original comics for around the same price, and feel much better for having them in your hands. Still, it has a nice cover – Dian The Beautiful, who else – which I’m sure would sit well on the shelves of Pellucidarian completists. What do you call fans of Pellucidar, anyway? Pellucidarlings, perhaps? Mike Wild