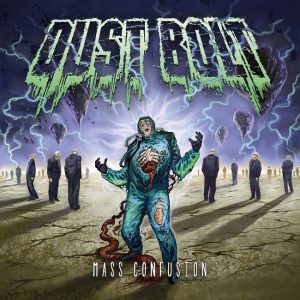 Our world is incredibly confusing . Humans don’t really seem to know what responsibility means and are only after power and money. The lyrics of this German band may touch on the insane reasons we come up with to wipe each other out, but musically, they’re crystal clear. It is ‘THRASH’. Delicious hell-razing thrash. I hear hints of Vio-lence and Slayer, but also modern bands like Warbringer and cross-over like Municipal Waste or Dr. Living Dead. Dust Bolt is as straight forward as can be and have an almost hardcore approach to songs. There’s even a ballad called Exit which upholds the traditions first laid down in the thrash rulebook by Testament and Laaz Rockit. Although Mass Confusion sounds fresh and the band have been fine tuning their sound over the course of three albums I do wonder who will pick this one up? I can’t get enough of this sound, but will it reach enough youngsters to ensure the bright future that Dust Bolt so richly deserve? Martijn Welzen