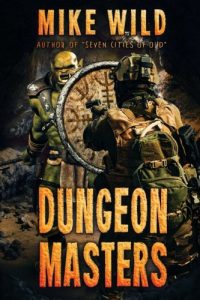 I feel like I need to start this review with a confession. Mike Wild is not only one of my favourite genre fiction authors, he also happens to be one of the nicest, most honest and open human beings that I’ve been honoured to meet. That said, as soon as I saw the title of his latest novel, I was sold. I mean, come on, how could a life-long gamer like yours truly not want to read a book called Dungeon Masters?  And the fact that was penned by Mr Wild was the maple flavoured icing on the bacon infused donut. Thing is though, I’ve learned to be a little cautious when it seems like the gods of fiction, cinema and music offer up such a rich boon. After all, if something looks like it’s too good to be true, then ninety nine times of a hundred it usually is.  Thankfully, Dungeon Masters is that elusive number one hundred and the exception to the rule, and more than lived up to my, admittedly incredibly high, expectations.

I’m pretty sure that Wild is one of only a handful of writers I’ve stumbled across who would come up with the idea to fuse a techno-thriller with Dungeons & Dragons and I’m almost sure that he’s also one of the only authors who could successfully pull it off. Which he does in spectacular fashion in Dungeon Masters, a nail biting action heavy, wildly* imaginative story that combines intricate corporate and personal conspiracies and parallel world theory in an incredibly intimate, character driven tale of dungeon diving, personal discovery, comradeship and loyalty, alternate realities and the battle to save two worlds, and everyone on them, from the clutches of a terrifying evil and its many faceted minions.

Wild has a knack for creating fierce, independent, strong females characters and the lead protagonist in Dungeon Masters, Trix Hunter is quite possibly his best creation yet.  Tough enough to give Steve Rogers a darn good run for his money and more resourceful than a platoon of Bear Gryls clones, she’s also just like the rest of us, flawed and damaged and as such is someone that everyone can relate to, and it’s her raw, unfiltered humanity that manifests itself as determined curiosity that allows her to stand head and shoulders above her contemporaries. Written with a deft, clever touch and a sly, dark and knowledgeable sense of humour, Dungeon Masters pays loving tribute to its sources of inspiration while expanding exponentially upon them and telling one heck of a cracking yarn.  Gary Gygax and Jack Vance would have loved Dungeon Masters, and if that doesn’t tell you everything that you need to know about this book, then I honestly don’t know what will. Superb… Tim Cundle

*I’m aware of how terrible the pun is. And yes, it was completely intentional.