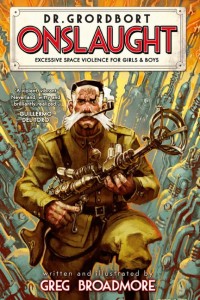 Dr.Grordbort: Onslaught – Greg Broadmore (Titan Books)
By Gad sir, if you’re looking for a rib-tickling, laugh out loud, surreal action and strange adventure packed steam punk tome charting the imaginary future bending technologies of the foremost Inventor of the Victorian age and the alien entrail festooned expeditions of its courageous, shoot-first-ask-the other-worldly-johnnies-questions-in broken –pig-English-later explorer, then you’ve come to the right place and no mistake. That’s right; ‘Onslaught’ is filled with all that sort of thing and more sirs. In fact, it’s filled to the brim and nearly bursting with all of that rum tomfoolery I tell you. And it does a chap’s heart good to be able to celebrate the bally great ray-gun, rocket, tanks and all of the wonders of the age developed by Dr. Grordbort and their usage against the Venusian savages and dashed awful moon men in the name of the Empire by its finest hero, and all round good egg, the inimitable Lord Cockswain. That’s right sir, it’s all about bringing civilization to every corner the Solar System all of its heathen inhabitants, and if it takes a little mass murder and massive amounts of firepower to do so, then so be it. They’ll all be happier for it afterwards, by jingo, you see if they won’t!

You see, ‘Onslaught’ is the fantastically talented Greg Broadmore’s exploration of an alternate, Victorian age, one filled with rocket ships, interplanetary expeditions and conquest, ray-guns, robots, and monsters. It makes fun of, and ridicules the worst excesses, notions, ideas and behaviour of the British Empire and the square jawed, stuff shirt, stiff upper lip resolve that saw ‘Good old Blighty’ bring ‘civilisation’ to the world. It’s a satirical, anarchical, laugh out funny combination of Edgar Rice Burroughs, The Young Ones, HG Wells, Jules Verne, Robert Crumb and The Goons, that’s part almanac and part “traditional” comic (well, graphic novel) storytelling in which the brain melting art and designs stand side-by-side with achingly funny stories and descriptions of the doodads, thingy-ma-jigs, doohickeys and oojamaflips. ‘Onslaught’ is bizarre, a thoroughly realised visual and literal examination of an age hitherto unimagined that once experienced, is never forgotten. And it is – I may hasten to add – absolutely bloody brilliant from beginning to end. With knobs on… Tim Mass Movement