After a seven hour drive from Panama City, Florida to Huntsville, Alabama I was invited onto the tour bus to sit with the legendary Doyle Wolfgang von Frankenstein. He had just finished working out and did not yet have his stage make-up on. Very quickly I learned some important things about Doyle. 1) He has a dry sense of humor. 2) He’s succinct. 3) He’s cool as hell. We talked very little about The Misfits and a lot about Alex Story and Doyle’s signature Annihilator guitars. I learned a lot and got to meet a long-time hero of mine.  What else is there to say? I MET DOYLE!!!

Mass Movement: When did you start playing music?

Doyle Wolfgang von Frankenstein: I was born in 1964. That’s the very beginning. (we both chuckle) When did I start playing music? Thirteen years of age. I started on guitar, harp actually.

MM: Do you still play harp?

MM: At what point did you realize you wanted to make music your career?

Doyle: When I seen you could get chicks.

MM: Did you play in any bands before you joined up with Jerry and Glenn back in the day?

Doyle: Yes, I was in Black Sabbath for a stint, Led Zeppelin, Aerosmith, Bowie. 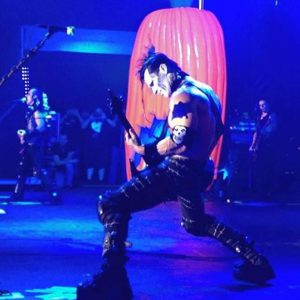 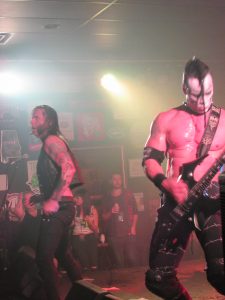 MM: Let’s skip forward to Gorgeous Frankenstein: it seems as if you were unhappy with the outcome of that album. Why?

MM: Did anything positive come out of that whole experience?

MM: How exactly did you find Alex?

Doyle:  I put ads out in New York and Los Angeles, in the papers as you do to find people for bands and his was the only CD I actually listened to the whole thing. I listened to a bunch of shit, I mean it was so many entries and some famous people and as soon as they started singing that shit went right in the garbage and his, I just listened to it, every song, well, it was Cancerslug. It’s like a train wreck, you can’t turn away. (laughs)

MM:  Did you know exactly what you were getting with Alex, I mean, he’s pretty fucking crazy on stage… Has he ever been more than you bargained for?

Doyle:  He has his stints, but, you know, we pull through it. (laughs)

MM: With the release of Abominator you seem to have found what you were looking for. What’s the major difference between the new band and your previous projects?

Doyle: I’m a better guitar player now. I think the songs in the Doyle project, even compared to The Misfits are, I’m gonna say more advanced technically in music and Alex is just one of the greatest songwriters ever. Once I give him the music he writes all the vocal melodies and all the words I don’t fuck with that because when you  have somebody that’s better than you at something you let them do it and if you don’t you’re a fucking jerk-off, just to put your name on it, you’re an asshole and a fool.

MM: And Alex is pretty outspoken and he’s never said a word about you that hasn’t been positively glowing.

Doyle: We get along great. It’s a perfect match. The writing, the live, the whole thing. We have a good time.

MM: How do you feel now that you’re two albums into creating a legacy that’s not tied to any name but your own?

Doyle: I like playing songs in the shows, that I wrote everything, all the music. I like playing my stuff. Playing The Misfits stuff, to me, it’s boring actually.

MM: Has the response to Abominator and As We Die Met your expectations?

Doyle: It’s taken a lot longer because we don’t have the capital gain to promote it properly. A lot of people don’t even know we have a band, that’s the thing. Once they do I think it will blow up because we don’t write a bad song. Even the ones we didn’t use are great.

MM: During all of this touring and promotion for Doyle the band you have played a few shows with Jerry Only and Glenn Danzig as “The Original Misfits.” What kind of experience has that been?

MM: What prompted you to build your own guitars?

Doyle: I didn’t like any that were being sold in the stores and I like mine to be a certain way so I just put everything I liked into mine. I started making them when we had a guy working in our shop, he was building guitars and he came in with this other guy and had a guitar with them and they were doing it really strange and I’m like give me that, let me put it on the machine and make it fucking nice. I put it on the machine and we started working together and I realized that I could make the whole thing in the shop so I started doing that and made it the way I wanted it and the body shape I drew on a book cover, you know when your mom would cover your books in your bookbag, I drew that guitar and I saved it. It was the only thing I saved. I’m like, I’m gonna save that, it’s fucking sick so I saved it and then when I went to make one I was playing a Paul Stanley Iceman at the time and I laid the Paul Stanley on the floor and I took the picture and eyeballed it and it was right to scale, “Holy shit! “ I’m like “That’s it then, let’s make this” so I started making it. It’s a nightmare to make. 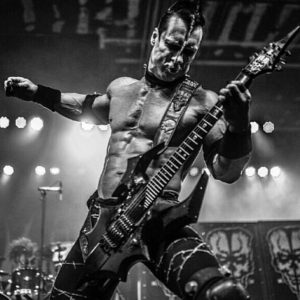 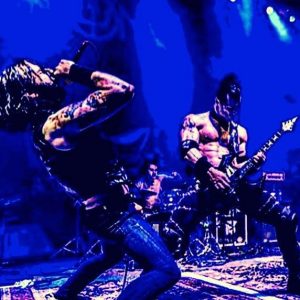 MM: How long did it take you to tweak the design to get it to where you were happy with the way it sounded and played?

Doyle: First one. That’s why I’m on, let’s see, one, two, three, four…  I’m on the fourth major guitar company has my guitar right now.

Doyle: They still haven’t made one. They’ve had it for eight months.

MM: I think Oktober (Guitars) got a few out and that was about it.

Doyle: Yeah but it was never the way I wanted it and that didn’t work out. Schecter finally passed, I went to ESP and they were like, you can pick one off the wall and we’ll put your name on it and I was like, I don’t think so and went to BC Rich, had it for a year and couldn’t do it which shocked mem they’re like, it’s too radical for us. I’m like what are you talking about? So now Dean has it so I’m gonna have to go there for a week and make it with them. I told them I would so as soon as I get some off time I’m gonna go down there for a week, go in every day, we’ll knock one out. I don’t wanna make twenty prototypes and then be pissed off.

Doyle: The ones for me are gonna be the best shit there is. I don’t know. We’ll see what we do. I like to put out good shit. I don’t wanna put garbage out. I don’t wanna have a kid buy a guitar and then something’s fucked up on it. That ain’t cool.

MM: I know of people who are trying to copy your guitar sound, even going as far as taking pictures of your pedal board at shows. Does this piss you off or is it flattering to know you’re having such an impact on young musicians?

Doyle: It’s impossible because it comes out of your hands, the sound. Everybody sounds different. I learned that, I seen Johnny Thunders play Bobby Steele’s guitar through my brother’s bass amp with The Damned and guess what he sounded like? Johnny Thunders. I seen Michael Amott play through a fucking Marshall this big (indicates the size of a small practice amp) and guess what he sounds like? Fucking Michael Amott.

MM: What do you think you would be doing if music hadn’t been such a big part of your life?

Doyle:  I’d probably be a bum.

MM: What kinds of surprises do you have in store for your fans?

Doyle: Surprises? There’s definitely gonna be a third album, a fourth album, a fifth album… There will be a surprise coming up that will turn some heads but …

Find out more about, and keep up to date with, Doyle here and here