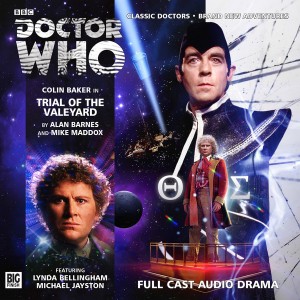 Doctor Who: Trial Of The Valeyard – Starring Colin Baker, Lynda Bellingham & Michael Jayston & Written By Alan Barnes & Mike Maddox – CD / Download (Big Finish Productions)
Of all the names that The Doctor never wants to hear again, The Valeyard is right up there with The Master, The Daleks and The Cybermen, and after the events of ‘The Trial Of A Timelord’, who could blame him? So, when he’s dragged before a Timelord tribunal that’s been convened aboard a space station and the Valeyard’s name is one of the first he hears, The Doctor immediately fears the worst.

But this time, he’s not the one on trial. The Valeyard is, and he’s requested that The Doctor act as his legal counsel. Reluctantly, The Doctor assumes the position, and proceedings get under way, but as with everything involving The Valeyard, nothing is straight forward or what it first seems to be as the case against his client unfolds, The Doctor finds himself in increasingly murky waters as one of the fundamental aspects of Timelord existence and the laws of Rassilon himself are called into question, in a conspiracy that implicates not only The Valeyard, but also his ‘trusted’ counsel. The Doctor. ‘Trial Of The Valeyard’ is a magnificent court room thriller, one that practices, and has perfected, the art of prestidigitation, weaving a plot that points its audience in one direction before spinning them another, then reversing direction and dancing around them before acquiescing and drawing the curtain on the final, grand reveal.

Both story and cast are first rate, the former involving the audience in all of the stories wonderful minutia and the later benefitting greatly from the reduced size of the assembled players, allowing them to test the boundaries of their roles and explore their characters fully within the boundaries of the drama, which makes the story more involving and complete, while lending it an air of finality and ensuring the door remains ever so slightly ajar, teasing the possibility of another chapter. Fantastic… Tim Mass Movement