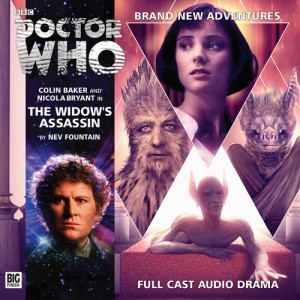 Doctor Who: The Widow’s Assassin – Starring Colin Baker, Nicola Bryant, John Banks, Tim Chipping, Fiona Sheehan, Andrew Dickens & Glynn Sweet & Written by Nev Fountain – 2xCD / Download (Big Finish Productions)
If you’re lucky, and I mean really lucky, every once in a while the clouds will part, you’ll find yourself surrounded by “God light” and all the chaos, noise and confusion abates, and in a perfect moment of clarity and epiphany, everything becomes crystal clear. These infrequent instants, these blips in time, they add something special and extraordinary to everyday life, a glimpse of the myriad of colours that dance on the edge of imagination and the endless possibilities and avenues offered by the ongoing story of existence. That feeling, fate’s lightning strike, that’s the reaction I had while listening to ‘The Widow’s Assassin’. Trying to explain why it happened (and happens every damn time I listen to it), when I don’t really understand why it happens myself, that’s going to be more than a little difficult. But, I’ll try my utmost, so bear with me.

‘The Widow’s Assassin’ is set in the aftermath (actually, it’s more Peri’s aftermath, as The Doctor has been around a bit since then) of ‘Mindwarp’. Arriving to attend the wedding of Yrcanos and Peri, The Doctor finds himself cast into the Dungeons where he languishes for a considerable amount of time following the tragic events of the Royal nuptuals. Embroiled in a murderous mystery, the plot thickens as he’s spirited off planet with Peri, her head of security and guards in order to attend a gathering of galactic nobility, convened to find a suitable husband for a new Queen. And as the suitors duly start to espouse their qualities to their would-be bride, The Doctor and his friends become the chief suspects and apparent victims of further acts of murder most foul, and fall prey to a scheme years in the making, one involving deceit, betrayal and treachery on all sides, one that cast it’s net back, not only to the events that took place on Thorus Beta, but to The Doctor’s early years on Gallifrey, bringing him face-to-face with his oldest and most constant of foes.

It’s a tough exercise identifying the factors that made this drama so damn enjoyable. I could wax lyrical about the narrative twists, the delicious reveals, fantastic characterisation and the wonderful mixture of humour, adventure, mystery, tragedy, moustache twirling villainy and heroic self-sacrifice that lie at the heart of Nev Fountain’s tale. Or, I could pontificate at large about the wonderfully warm and funny performances of the players and the fact that we finally get to find out what happened to Peri after she left The Doctor during the events surrounding, leading up to and following his infamous trial. But I won’t single any individual factor out, because the overall triumph of ‘’The Widow’s Assassin’, is due to all of those facets working together in a wonderful synchronicity which combine to make the story shine fiercely and brightly. Which is nice… Tim Mass Movement