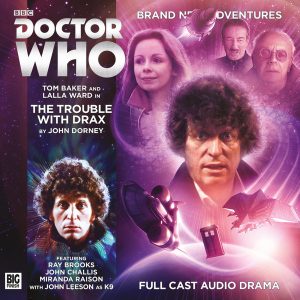 If Derek Trotter had been a Timelord, he would have been the Doctor’s old school friend Drax. (Anyone else picturing a yellow Reliant Robin that’s bigger on the inside?) Drax has found a map that leads to Altrazar: the Timelord equivalent of Atlantis and a place lost to time. Altrazar, like Atlantis, is believed by many to be a myth. But it exists and has, in fact, long been the perfect location for the rich and powerful to hide away their most dangerous secrets.

At the behest of a manipulative businessman, Drax plans to use the map to raid the most secure safe-house in history. But he needs some assistance…

When the TARDIS is dragged out of the space-time vortex, its crew aren’t best pleased to see the Doctor’s erstwhile schoolmate, and even less pleased when he press gangs them into joining the raid. With Romana and K9 held hostage, the Doctor has little choice but to agree, and with Drax in tow, he heads for Altrazar. Which, of course, is where the trouble starts.

If the Tom Baker era is my favourite then his time with Romana’s MK 1 and 2 was the best bit of my favourite era (if that makes sense).  There were actual whoops of joy from my office when I was asked to review The Trouble with Drax because if nothing else, it stars the holy triumvirate of Tom Baker, Lalla Ward and John Leeson as K9. Yes readers, I was as excited as I was 36 years ago watching City of Death for the first time. And with good reason, it seems.

It’s as if Tom Baker and Lalla Ward never left. They own this. Yes, Tom Baker sounds older, but he’s still The Ultimate Doctor ™ and Lalla Ward plays Romana at her supercilious best. And as if this weren’t nostalgia-festy enough, Mr Benn (Ray Brooks) plays a deliciously dodgy Drax. It’s heaven for those of us in our forties who were lucky enough to be the right age to enjoy the best of classic Who.

Listen to this, and yes, you’ll likely be transported back to Saturday nights when you were a kid, and as far as nostalgia-fests go, that’s no bad thing. But don’t just listen to The Trouble with Drax for the memories. It’s a bloody good story too.  Bex Ferriday