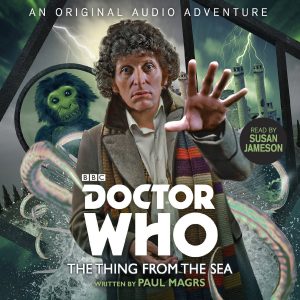 The Thing from the Sea is the first in a new set of original audio Doctor Who stories from BBC Audio using the ‘Classic’ doctors of the 20th century. Setting out the stall for these stories (there will be a First Doctor story released in May, a Third Doctor release in July and so on), it uses the single-narrator principle of audiobooks, rather than a full cast, and has a running time of an hour and ten minutes, making it if not exactly bitesize, then certainly more manageable than a full-length Who story.

To kick us off, the BBC has returned to its previous experiment with original Fourth Doctor stories, the ‘the Nest Cottage Chronicles,’ from writer Paul Magrs. In those Chronicles, Magrs took the perennially popular Fourth Doctor, played by Tom Baker, and gave him more of a grounding, putting him in a cottage, in a village, with a housekeeper, and having adventures within that structure.

Housekeeper-cum-companion, Mrs Fenella Wibbsey, played by Susan Jameson, is our window into the Doctor’s world for The Thing From The Sea, which along with its shift to a single-narrator format also becomes rather more ‘business-as-usual’ 1970s Who than the Nest Cottage Chronicles were, with the Doctor taking Mrs Wibbsey to 18th century Italy to recuperate after she suffers some dark, disturbing dreams.

That 1970s Who feeling, added to the fact that Paul Magrs is a writer who delights in the unusual and the macabre, means that a trip to soak up the Italian sun and the peace of a coastal Mediterranean village soon reveals its darker side – the villagers look drained and grim, and are suspicious of strangers. There’s a tumbledown castle on a hilltop, where a Count lives, sustained it seems by demonic energies and possessed of horrible powers. There are creepy homunculi and powerful sorcerers at work…and the local fishermen have just pulled something truly spectacular out of the sea.

In pretty typical 1970s style, Mrs Wibbsey is led to explore the dark side, hoping perhaps the Count can give her a more permanent solution to the dreams she’s had and the voices she hears than a spot of sea air, and while it would be a crime to tell you how all the pieces of Magrs’ puzzle actually fit together, there’s a pleasing parallel progression of Wibbsey’s explorations in the castle and the Doctor’s introduction to the ‘thing from the sea,’ which ties together in a conclusion that doesn’t exactly break the rules of time and paradoxes, but does perhaps bend them a little far for the taste of some listeners. There’s also, arguably, a bit of ‘Episode 3 padding’ – which again will be familiar to those with a fondness for Baker’s era of Who, as things hurry up and wait to click into place and people schlepp from A-B so they can be at B just in time for the Doctor’s clever denouement. But there are lovely touches along the way, with some properly gothic atmosphere, some creep-out moments, a healthy moral along the lines that being a monster doesn’t depend on what you look like, but how you act, and even a name-check treat for Harry Potter fans. The ending is a clever denouement, for all it relies on the inherent weakness in the villain. There’s no shame in that – a frequent part of what makes villains villains is their inherent weakness of character, and the Doctor exploiting the villain’s weakness, rather than actively standing up against them and defeating them, is tried and tested Doctor Who strategy. Besides, Magrs keeps us busy and interested along the way to his application of the formula, making for a satisfying, atmospheric and affecting journey.

Jameson’s narration is pally, warm and intimate, Mrs Wibbsey knowing the Doctor of old, but unwilling at first to automatically confide her fears about the potential of her dark dreams even to him. It’s a relationship that becomes very quickly believable even without experience of the previous Nest Cottage Chronicles. The Thing From The Sea is perhaps a tentative step for the BBC outside its audio comfort zone, but as a story, it’ll more than keep you entertained, and for any newbies to the relationship between the Fourth Doctor and Mrs Wibbsey, it serves as a warm, engaging introduction, that will have you searching for the Nest Cottage Chronicles to find out more.  Tony Fyler