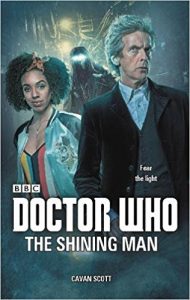 Halloween 2016 was a little different to previous Halloween’s. Yes there were pumpkins, trick or treaters, and gardens dressed in tacky mass produced faux horror props. But there was also the scary clown phenomenon that was making the news. Basically it was idiots dressing up as scary clowns and scaring the holy hell out of passers by all over the U.K. Well, Cavan Scott has taken that as the inspiration for this book, except for scary clowns read Shining Men.

Abnormally tall, featureless faces, long hair with shining lights for eyes the Shining Men are those things that you see in the corner of your eye, but disappear when you turn, except this year they are everywhere. The Doctor finds himself involved after two children lose their mother when she attempts to confront a prankster dressed as a Shining Man. Not an isolated incident, The Shining Men have a dark agenda and the Doctor and Bill have to find out what that is, before more people go missing.

Part of a trio of novels that coincide with the current series, The Shining Man is another example of how well Scott captures the essence of the characters, as this book was written well before Bill’s introduction to us on screen, yet she is characterized perfectly. The basis of the story is more Lord of the Rings than Star Wars and while that may seem strange to some Whovians, it works very well and makes for a pleasant change. There’s plenty of banter between the Doctor and Bill and Scott makes good use of modern language dropping in vlogging and hash tags for the Doctor to bounce off. The pace of the book, much like the storyline is frantic and uneasy, which is exactly how you are meant to feel when reading it. Cavan Scott delivers once again… Chris Andrews