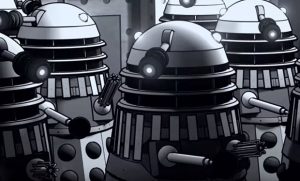 In a first for a UK television programme the new BBC Worldwide animated version of Doctor Who: The Power of the Daleks is to be premiered live and exclusively on Twitter via Periscope at 17.50, Saturday 5th November, 50 years to the minute after the original version of the programme was first transmitted on BBC One in 1966.

Fans around the world will be able to watch an exclusive live streaming of the first three minutes of the first episode of the new animation on the @BBCStore Twitter account at 17.50 this Saturday and UK residents will also be able to purchase all six episodes of the animation from www.bbcstore.com and on DVD from Monday 21st November.

Doctor Who: The Power Of The Daleks is one of the Doctor’s most celebrated adventures but the original tapes were destroyed and no copies exist.

In September this year BBC Worldwide announced a brand new black and white animation based on audio recordings of the programme using the original cast, surviving photographs and film clips which will be released 50 years to the minute after its only UK broadcast on BBC One.

The six half hour episodes feature the regeneration, or as it was then called ‘renewal’, of First Doctor William Hartnell into Second Doctor Patrick Troughton, as the Time Lord and his companions Polly (Anneke Wills) and Ben (Michael Craze) do battle with the Daleks on the planet Vulcan.

Doctor Who: The Power of the Daleks is being produced by the team behind the highly successful animation of lost Dad’s Army episode A Stripe For Frazer, first released on BBC Store in February this year. The producer and director is Charles Norton, with character designs from acclaimed comic book artists Martin Geraghty and Adrian Salmon.

Jonathan Green, Director, BBC Store says, “BBC Store is proud to be working with Twitter to bring fans this UK first. This episode broke the mould with the recasting of the Doctor and it’s still thrilling audiences in new ways today.”

Rhidian Bragg, Head of Sales, Consumer Products, BBC Worldwide says, “We’re really excited to be able to bring fans a Doctor Who adventure that they thought they’d never see. The animation looks amazing and is a fantastic addition to our catalogue of classic Doctor Who titles.”

Georgina Parnell, Head of Entertainment Partnerships, Twitter said, “Doctor Who is a global phenomenon and by broadcasting The Power of the Daleks live on Periscope, fans from across the world will – for the first time – be able to join together and watch it at the same moment, exactly 50 years to the minute since the very first episode aired in 1966. Even the Doctor couldn’t have predicted that…could he?!”

Doctor Who: The Power Of The Daleks will be available to download from www.bbcstore.com from 17.50 on Saturday 5th November priced £9.99 (SD) and £12.99 (HD). The DVD will be released on Monday 21st November and is available from HMV and Amazon