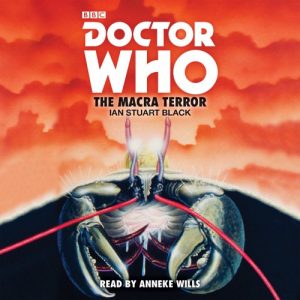 When the Second Doctor, Polly, Ben and Jamie visit a human colony that appears to be a massive holiday camp, they think they have finally managed to stumble across a truly happy place. Yet a shadowy presence soon makes them realise that any surface contentment is carefully controlled.

The colony’s inhabitants have been brainwashed by giant, crab-like creatures: the Macra (think Rupert Murdoch with claws).   Carried out via insidious propaganda broadcast by the Controller, these creatures force the humans to mine a gas that is essential for the Macra to survive, but fatal to them.

Can the Doctor stop the Macra terror before it’s too late for the colony…and for one of his companions?

The last time we encountered the Macra must have been a good ten years ago in the tenth Doctor episode ‘Gridlock’.  This is a retelling of their only other televised adventure, so while many a completest will be delighted that this story is now finally available to enjoy (not only is it a missing story, it’s one with every episode missing), it also introduces a new generation of Whovians to these crazy crustaceans. And, with no television budget or time constraints, there’s the freedom to add more depth and coherence to the story, so (and here’s a controversial thought) maybe it’s for the best that this one isn’t available to view.

Before signing off, I’d like to say how impressed I am with narrator Anneke Wills, who manages to navigate a mass of male characters brilliantly. It can’t be easy to remember which bellowing bloke’s nuance she has assigned to which bellowing bloke, but she switches effortlessly and, as I’ve mentioned in previous reviews, she really seems to be having a brilliant time reading these audiobooks. Long may she (and they) continue! Bex Ferriday