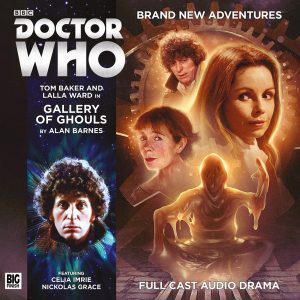 With a title that suggests that the Doctor and Romana are about to encounter all sorts of monstrous abominations and graveyard denizens, Gallery of Ghouls fashions an air of the macabre and mysterious before it even begins. Such is the power contained in its name, that when it becomes apparent that it actually relates to one of the protagonists, it’s too late to bemoan the lack of undead spectres as it’s already spun its dark magic, enticing the listener in with its combination of penny dreadful plot, gothic horror, pulp science fiction and historical adventure.

Arriving in Brighton nearly two decades too early to visit the famous Pavilion, The Doctor and Romana seem doomed to wait for its opening until they discover that the town is playing host to the Doctor’s fifty eighth favourite thing, a travelling wax work exhibition.  Deciding to stay and visit the show, they soon find themselves entangled in a rivalry between the resident museum of wax simulacrum and the touring repository, a rivalry that rapidly escalates in the wake of the Doctor being wrongly accused of petty theft.  Having had their curiosity peaked by the real perpetrator, their investigation of the impossible criminal leads the Doctor and Romana into a chamber of horrors in which deception, strange automata, Marie Antoinette, bizarre alien endeavours and a desire to become the premier attraction in town take centre stage. And neither of the warring shows are what they claim to be.

Casting aside the deadly seriousness that can all too often consume Doctor Who in favour of a far more light-hearted, humorous approach, Gallery of Ghouls treads similar territory to, and shares a similar underlying sense of mischief and wit as, the Douglas Adams helmed stories of the Doctor and Romana’s late seventies escapades in the Tardis.  The cast are in fine form, delivering a brace of fantastic performances that bring to life this wonderfully bizarre, frenetic and engaging period drama that’s bursting with both historical and cultural references. Ghoulishly good fun…  Tim Cundle