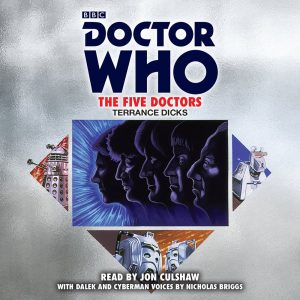 In Doctor Who, when you get different incarnations of the Doctor together, especially on-screen, usually a few things are happening. Usually, you’re celebrating an anniversary of the programme. And usually, you have to have a story big enough to give each incarnation something interesting to do, to honour their time in the Tardis with something chunky to add to their legend.

In 1983, to celebrate the 20th anniversary of the show, one of fandom’s favourite writers, Terrance Dicks, was drafted in to create a scenario for all five Doctors (despite William Hartnell, the first Doctor, having died, and stand-in Richard Hurndall being hired to give the First Doctor his due). Following the example set by Bob Baker and Dave Martin with their tenth anniversary story The Three Doctors, Dicks made the story he created all about the history of the Time Lords themselves, pitting the by-then five incarnations of the Doctor against a legendary figure from Time Lord legend – in 1983, it was Rassilon, the political force who had started the first time travel experiments and ruled the planet back in ye olde, darke, myfsteriouf tymes.

A zone of death, which allowed for returning monsters, villain team-ups and companion pop-ups was a smart way of getting as much Who nostalgia for his BBC buck as possible, and what was eventually screened hung together remarkably well – Tom Baker, by then only a handful of heartbeat away from the role, decided not to reprise his role as the Fourth Doctor, which meant he was represented by some unseen footage from a cancelled story, and was then ‘trapped in the vortex, acting like a drag anchor on the other Doctors and adding an additional danger – the fact that Dicks made that sound plausible is a tribute to the man Doctor Who fans know as ‘Uncle Terrance’ and his utter bravado. Say a thing and it is so in Doctor Who, and Uncle Terrance said a whole heck of a lot of things which have given us substantial chunks of the legend of the Doctor as we know it today.

Dicks was also chief novelizer of the Doctor Who stories for Target Publishing, and The Five Doctors novelization set out to capture the essence of the broadcast version, but to buff away some of its budgetary limitations. At the time of its release it was the must-have Target novel – buying it was like your own personal ‘Happy Anniversary’ to Doctor Who.

It’s taken 35 years – almost twice as long as the show was celebrating at the time – for The Five Doctors novelization to come to audio.

It’s worth it for Jon Culshaw.

The irony is of course that Culshaw is a world-class impressionist, and among the things for which he’s best known is a freakishly perfect Tom Baker as the Fourth Doctor. Annnd the Fourth Doctor appears for about four minutes in this story. But throw away any notion that that means Culshaw’s been miscast as the reader of this story.

He’s perfect. Culshaw here unveils not only that he does a spot-on Jon Pertwee as the Third Doctor, and a shiver-inducing Patrick Troughton as the Second Doctor, but also that his First and Fifth Doctors, while not quite in the same league, give you quite enough of a suggestion to believe in, and that he’s really watched the story, because his version of Brigadier Lethbridge-Stewart is uncanny too, his version of Anthony Ainley’s Master, while not an exact replication, is quite whispery and malignant enough to get you there, and even his rendering of Philip Latham’s President Borusa is unnervingly accurate too. Culshaw gives you, in short, way more than your money’s worth in this audiobook. He gives you almost a full-cast performance. Singlehandedly.

It’s true that his female characterizations are a little more hit and miss – the Australian accent gets you some of the way with Tegan, and there’s a kind of watery neutrality to Culshaw’s version of Susan that feels close enough to the real thing to pass muster. His Sarah-Jane Smith you might not pick out of a line-up and say ‘That’s Elisabeth Sladen,’ but Culshaw brings a spirit of enjoyment and adventure to all the characters he inhabits here that allows him leeway when he’s not absolutely spot-on, because he so often is. His narration of the non-character elements rattles you along too, pitched with a kind of edge-of-the-seat Jackanory enthusiasm that is never less than enjoyable.

Jon Culshaw and Doctor Who audiobooks were always going to be a match made in Time Lord Heaven. The surprising thing to most listeners will be that this is still the case when he’s not reading Fourth Doctor stories.

If The Five Doctors was a must-buy novelization back in 1983, its audiobook is a must-listen in 2018. Spend some money, and devour the whole thing at a sitting – Culshaw and Terrance Dicks are a perfect combination and you’ll spend the run-time with grin after grin on your face. Tony Fyler