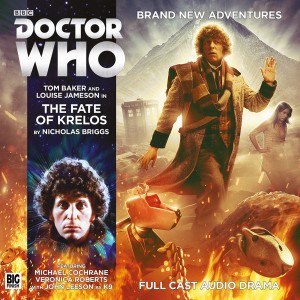 Doctor Who: The Fate of Krelos – Starring Tom Baker, Louise Jameson, John Leeson, Michael Cochrane & Veronica Roberts & Written by Nicholas Briggs – CD / Download (Big Finish)
I’m sure that most of you are familiar with that age old saying ‘mighty oaks from little acorns grow’, that’s used when something has a small, and seemingly innocuous beginning, but later goes on to become something magnificent, aren’t you? Well, bear that in mind, and focus on it, when you listen to ‘The Fate of Krelos’ as it sums up this tale, the first half of a two part drama, perfectly. On the surface, it’s a rather gentle story about a society destroyed by a terrible accident related its increasing reliance on technology, that is for the most part a two hander focussing on The Doctor and Leela, who just happen to be, as usual, in the wrong place at the wrong time due to the formers desire to indulge in a little fishing. But as it progresses, a succession of seemingly unrelated and random events begin to form a pattern; and it soon becomes apparent that ‘The Fate of Krelos’ is about so much more than a fishing holiday as the terrible truth about the calamity that has befallen Krelos gradually begins to make itself known.

It’s the little things that matter in ‘The Fate of Krelos’: the way the Tardis control room is suddenly transformed into an earlier version of itself, the technological parasites that have infected the Krelos’s systems and the way in which all of its citizens have been turned into catatonic, almost mindless slaves, all point The Doctor, Leela and the listener in a singular direction, one that isn’t revealed until the closing moments of the drama, but is already suspected by the audience. And it’s peppered with little clues, the reminders of Jamie, the way in which The Doctor and Leela first meet Geralk and his form when they do so and K-9’s increasingly erratic behaviour, are again, all seemingly unrelated until you begin to see the pattern emerge, but by the time you do, it’s too late, the trap has been sprung and The Doctor and Leela are heading directly into the lions (although we all know it’s not a lion, but it is something far more frightening, cold and merciless, but let’s stick with lion as it’s a little friendlier and less obvious) den. Mighty oaks from little acorns grow.

‘The Fate of Krelos’ is an alluring and fascinating story that thanks to some rather clever prestidigitation by its writer Nicholas Briggs, makes its audience thing that they’re listening to one story, when really they’re listening to two, as the second slowly unfolds around The Doctor and Leela, sucking them into its ice cold embrace. It’s clever, intriguing and involving and I can’t wait to hear what happens when the Tardis reaches its final destination. Until next time… Tim Mass Movement