Warning: preg_match() expects parameter 2 to be string, object given in /var/www/vip4/sites/vip6102689/httpd/htdocs/wp-includes/formatting.php on line 4866
 Doctor Who: The Defectors - Mass Movement
x
Spread the love 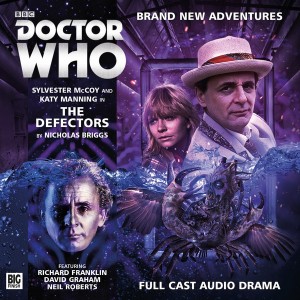 Doctor Who: The Defectors – Starring Sylvester McCoy, Katy Manning, Richard Franklin, Barnaby Edwards, Neil Roberts, Rachel Bavidge, Jez Fielder & David Graham & Written by Nicholas Briggs – 2xCD / Download (Big Finish)
I’ve never made secret of the fact that the Third Doctor is my Doctor. I don’t know why, because I didn’t grow up watching him, I grew up watching Tom Baker and Peter Davison,; but as soon as I read the original Target novelizations of ‘The Cave Monsters’ (more commonly known as ‘The Silurians’) and ‘Carnival of Monsters’ that was it, I’d found my Doctor and when BBC 2 later repeated ‘Carnival…’ and ‘The Three Doctors’ it only served to reinforce my faith and belief, which after more than three decades have both remained constant, in the Third Doctor. So, how would a Third Doctor story that doesn’t feature the Third Doctor, but instead features the Seventh Doctor, which is essentially what ‘The Defectors’ is, work and, more crucially, is it any good? Well, yes it is actually. Pretty darn good that is, and yes, it works. It actually works surprisingly well. Don’t believe me? Okay, well in that case, give me a minute, let me explain why it works and why it’s more than a worth you’re a chunk of your hard earned change and a couple of hours of your time and then you can decide for yourself can’t you? Deal? Good, then I’ll begin.

Left at the mercy of a squad of strange soldiers after Mike Yates is summoned to London to attend to a security emergency, Jo Grant is surprised to find that her Doctor has disappeared and appears to have been replaced by a strange little man claiming to be Doctor number seven who can’t explain why he’s there and where Jo’s Doctor has gone. But before they can explore the mystery and the disappearing and appearing Doctor’s further they’re both whisked away to a top secret military facility designed to house high level defectors on an island no-one has ever heard of in order to help on hush-hush project, an island where nothing is quite right. Where the beer and food have gone stale, where the fishing fleet has rotted in the harbour and nobody seems to know anything, because everything is a matter of ‘National Security’. And then things begin to get really strange. Why do all of the islands inhabitants have blue skin? Why does no-one seem to have aged since nineteen fifty one and what was it that the army pulled out of the sea at the beginning of that fateful (for the islands inhabitants anyway) fateful decade? It’s a mystery wrapped in an enigma created by monsters that only the Doctor (regardless of the numbers game), with a little help from Jo Grant and UNIT, can solve.

‘The Defectors’ as I’ve already said, is for all intents and purposes, a Third Doctor story, and from the moment it started, right up until the final, fading seconds of the story, I was grinning from ear to ear, immersed in the drama and lost in the minutia of the after-effects and consequences of a first contact scenario that went drastically and horribly wrong. The pace, plot and atmosphere all feel right, and pay due deference and homage to the heyday of Jon Pertwee’s adventures in the Tardis, and even though the story wears it’s influences on its sleeve (‘It Came from Outer Space’ and ‘Island of Terror’ among others) and revels in them, it possesses a wonderful nostalgic quality, aided no doubt by the incredible chemistry between, and performances from Sylvester McCoy and Katy Manning that reminds you why Doctor Who is eternal, and why it’s so beloved by its legions (me included) of fans. So, is it any good, this Third Doctor story without the Third Doctor? No, it isn’t. It’s absolutely marvellous. In fact it’s marvellous with an extra dollop of brilliant on top. More please! Tim Mass Movement