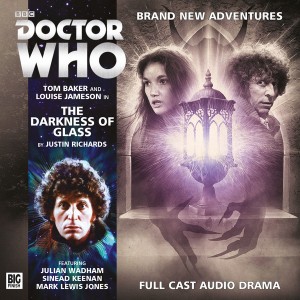 Doctor Who: The Darkness of Glass – Starring Tom Baker, Louise Jameson, Mark Lewis Jones, Julian Wadham, Sinead Keenan & Rory Keenan & Written by Justin Richards – CD / Download (Big Finish Productions)
If you’d asked me yesterday if I believed in ‘Magic Lanterns’, I’d have laughed and instantly dismissed the idea as hokum, the stuff of fairy tales and legend; and I would have revelled in my own pomposity whilst doing so. I’d have been wrong of course, as for more than two centuries, magic lanterns and the men who operated them, the ‘lanternists’ entertained royalty, aristocracy and anyone else who could afford to employ their services. Okay so strictly speaking they weren’t magic at all, rather a crude, and very early form, or cinematic projection, but they did exist, and if I hadn’t been exposed to the rather brilliant ‘The Darkness of Glass’, I’d still be woefully ignorant of their existence. It really is true, you do learn something new every day.

Back to the matter in hand, and ‘The Darkness of Glass’, in which The Doctor and Leela become caught up in the mysterious celebration of the centenary of the death of the world’s greatest lanternist (a celebration held by the society founded to preserve his memory) in the isolated, costal home in which he took his own life at the culmination his final performance. It’s a celebration that inevitably ends in death, as The Doctor, Leela and the society’s guests end up in embroiled in a murder, monsters and the very real possibility that there might just be a little magic left in the world, dark magic conjured into being by the men who wield the lanterns. As the body count mounts, The Doctor is left desperately trying to find a way to counter the “spell” woven by the lantern before he, Leela and the surviving society members fall prey to the shadows.

‘The Darkness of Glass’ embodies, and employs, the same wonderful spirit of gothic horror as ‘The Talons of Weng Chiang’ and ‘The Horror of Fang Rock’ in its frantically paced, marvellously involving, murderous plot. It’s a character driven chiller that plays on the original Arabic tales of the magic lamp and the demonic power it possessed, that’s full of chicanery and villainy, keeping you on your toes at all times, as you question the motives of all involved, before the prestige (that’s the big reveal to you folks not in the know) finally sneaks up behind you and whispers ‘Boo’ in a surprise twist that only The Doctor would see coming. Dim the lights, it’s show time… Tim Mass Movement