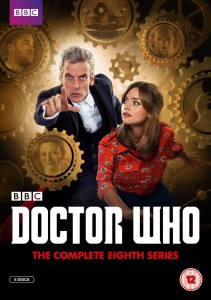 Doctor Who: The Complete Eighth Series (BBC Worldwide)
Change is never easy, and no matter how many times you go through it, it never gets any easier. But, as difficult as Regeneration can be, when one Doctor falls, another Doctor rises and while that’s always been the sugar coated icing on the three week old fruitcake, the problem has always been, and will always be (and without wanting to sound like Forrest Gump), that you never know what you’re going to get next. So that feeling of loss is always amplified by the trepidation of not knowing whether you’re going to embrace or shy away from the latest face and personality of the near immortal Time Lord. This time, with the appearance of the Twelfth Doctor (although, if you count John Hurt, technically he’s the Thirteenth, which according to established Who mythology and canon should be impossible, as the Fat Lady always used to sing after the Twelfth regeneration and in Time Lord biological lore, thirteen wasn’t just unlucky, it was non-existent) things were a little more difficult. Peter Capaldi, the new chap, was replacing the universally adored and perhaps the most loved Doctor since Tom Baker, Matt Smith, a task that was never going to be easy and was always going to be slightly similar to scaling Everest in banana skin shoes. And as the title music to the first episode began, fandom collectively held its breath, exhaling twelve weeks later when the online furore, keyboard battles and social media outbursts generated by The Doctor, Clara, Danny, an age old adversary and their latest adventures had finally begun to dissipate.

The Eighth series of Doctor Who has been a gut wrenching rollercoaster, full of twists and turns, (some that weren’t surprises and others that were as they snuck up behind you, while bursting a balloon and shouting “Boo!”) featuring euphoric highs and bitter lows that both dazzled and disappointed in equal measure. While Peter Capaldi’s portrayal of The Doctor has never been less than sublime, adopting a more “classic” approach to the role by channelling and combining the eccentricity, aloofness and arrogance of the Third and Fourth Doctors and making his Doctor seem far more alien and at times even frightening, and Gemma Coleman and Samuel Anderson have played their roles as companions (Yes, Danny Pink was, and is, a companion of The Doctor and no, you’re wrong. History will remember him as being so and will prove me right. So, yah, book sucks to you) to perfection, some of the adventures that they found themselves embroiled and involved in, have been rather less than spectacular. The problem has been the consistency of the writing, because when it’s been good, it’s been very, very good, but when it’s been bad, it’s been horrid. That said though, for every cringe inducing historical trip to Nottingham (‘Robot of Sherwood’) and every shudderingly awful weak attempt to incorporate Gaia theory into the Whoniverse (‘In The Forest of the Night’), there’s a been a classic monster in the dark story (‘Listen’), wonderfully strange whodunit (‘Mummy on the Orient Experience’), endearing and character based tale (‘The Caretaker’) and fantastic nostalgia based ode to the space bound days of yore (‘Kill the Moon’). Oh and there’s also been planet of Cybermen, Daleks and the re-appearance of an old, and always welcome, adversary, all of which are like manna from heaven for long-time, life-long fans, and possibly for newbies as well. Not being a newbie though, I wouldn’t know, but I’d imagine they would, because I couldn’t imagine anyone not enjoying them and The Doctor doing battle with the fate of planets and galaxies at stake.

As I said, it’s been a rollercoaster, and while ‘Series Eight’ hasn’t been the strongest Who season, it hasn’t been the weakest either as there are a few from the later classic era that were decidedly worse. It may well have gotten off to a shaky start, but the good has outweighed the bad and Capaldi’s take on The Doctor is excellent, a bizarrely likeable, thoroughly selfish and obnoxious “hero” who, given the room to develop and grow as he should, could very well become one of the greatest to have ever flown the Tardis. It’s the writing that’s been a problem this time, but I have faith that now that Stephen Moffat and his team know who this new Doctor is, they’ll know how to play to his strengths and create a Universe for him to only play in, but stride through like the Colossus he is, always has been and always will be. From small acorns, mighty oaks grow… Tim Mass Movement