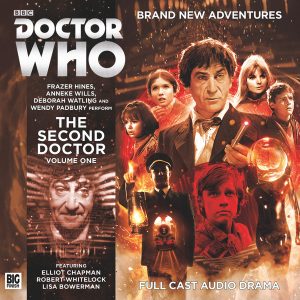 As he’s one of the Doctor’s longest serving companions, and certainly spent more time aboard the Tardis with Second Doctor than of his fellow travellers, it’s fitting that the central character in this volume is James Robert McCrimmon. Or, as he’s better known, Jamie.  Chronologically, the four stories featured in this collection, follow Jamie from his early adventures with the Doctor, Ben and Polly, through to the time Victoria spent on-board and culminate in a brace of tales featuring the irrepressible Zoe Heriot.  Each story feels as though it came from that period, as though it could, and should, have been part of the time that Jamie spent with his friends and The Doctor zipping through the Cosmos.  But more importantly, while thematically widely different, each story is gripping and hugely enjoyable and follows the exacting Second Doctor formula to the letter.

Beginning with The Mouthless Dead, in which the Tardis collides with the train carrying the Unknown Soldier to his final resting place during its journey through Kent in 1920, The Second Doctor Volume One, sets off at a sprint and never looks back or pauses for breath. Incorporating elements of gothic horror into proceedings and offering an insight into the national grief and mourning that gripped the country in the immediate aftermath of the First World War, it’s a tale of sadness, redemption, death, acceptance and coming home that just happens to include hordes of spectral soldiers. After his escapade with Ben and Polly, in The Story of Extinction, the spotlight shifts to Victoria and together with Jamie, she discovers the power of the written word after becoming part of an archaeological expedition on what they think is an uninhabited alien world.  Finding the remnants of long dead civilisation and their warnings from history, the Doctor and his companions are faced with the very real prospect that they might end up sharing the fate of the planets previous inhabitants when their colleagues begin dying.  It’s a wonderfully retro Science Fiction story with a fast beating pulp centric heart at its core that flicks and punches all the right Who switches and buttons.  Then it’s Zoe’s turn, and in the first of her two stories, The Integral, the Tardis crew become embroiled in a good old fashioned murder mystery that’s set in strange futuristic asylum in which the patients, all of whom are victims of the same computer game born virus, are treated by a combination of technological and extra-terrestrial biological care. All isn’t well in the treatment facility though, and as the staff numbers decrease by foul means, the patients’ symptoms increase in a story that fuses mad scientists, corporate greed and homicide with a smattering of vintage Hammer storytelling, while also examining the theoretical consequences of society’s ever increasing dependence on, and usage of, computer games.  Saving the best for last, The Edge is a furiously paced tale of intergalactic criminality and intellectual greed that pits Jamie against the villain of the piece after the Doctor and Zoe are waylaid by their curiosity. Influenced by cult Sci-Fi films like Outland and Moon Zero Two, it blazes through its involving, clever plot at a frantic speed and while you won’t want it to end, when it does, it finishes with a flourish that’ll leave you grinning from ear to ear.

The integral idea of the Companion Chronicles is to tell period specific stories and continue the adventures of each incarnation of the Doctor in a manner befitting them, and The Second Doctor Volume One, faultlessly achieves its goal. Frazer Hines slips back into Jamie McCrimmon’s skin with an ease that suggests he’s just as comfortable in it as he is in his own, and his uncannily accurate portrayal of the Second Doctor is devastatingly flawless and it always sends a shiver of excitement down my spine and makes the hairs on the back of my arms stand on end when I hear him team up with Deborah Watling, Wendy Padbury and Anneke Wills (and astonishing Elliot Chapman who inherited Ben mantle’s from Michael Glaze)  to fight all kinds of monsters and right all kinds of wrongs. It’s his performance combined with the beautifully constructed, and written, adventures that ensure that the Second Doctor lives on to fight, and save, another day.  Creag an tuire… Tim Cundle