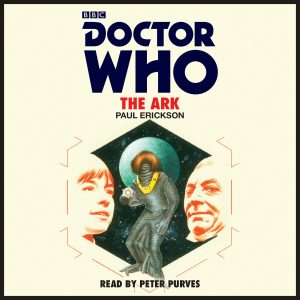 Doctor Who has always been a story-driven TV show, an idea-driven TV show, rather than, for most of its life to date at least, a budget-driven TV show. That inevitably means there are stories across its long history that have been brilliant as stories, but have been let down by budgets, effects and occasionally monsters that make you wonder ‘What in the space-time continuum were they thinking when they created that?’

The Ark, from First Doctor William Hartnell’s third season, is one of those stories. At its core, The Ark is a brilliant tale of humans fleeing the destruction of the Earth by the Sun, taking all the animals with them, along with micro-dotted human beings (it’s actually anyone’s guess why they miniaturise and store the humans, but build the biggest spaceship in the world with all the habitats for full-sized animals, but let’s not go there), and a friendly bunch of mute creatures called the Monoids. It takes in themes of privilege and revolution and also, for one of the first times in Doctor Who history, it deals with the consequences of the Doctor’s interference when, after his companion Dodo infects the crew of the Ark with a cold which turns fatal, and the Doctor creates a vaccine from the various animals and plants on board, they leave, only to immediately return to the same spot 700 years later and see the inverted world their actions have brought into being. The Monoids, previously mute and docile despite their intelligence, have found a voice, found some heat guns and found the top of the totem pole of the Ark’s society, and are now ready to disembark the Ark, destroy the humans and colonise their new Eden with happy little Monoids.

But then…there’s the Monoids. On screen, they were bad on an almost inventive level – one-eyed creatures with wrinkly rubber-suit skins and an unspeakable Beatles mop-top, and they served to steal much of the drama from The Ark because every time you looked at them, your reaction was ‘Oh, that’s just so wrong.’

Rejoice, then – the audiobook version means you can invent your own Monoids, albeit they’re described in the text. Your mind has a bigger budget than the BBC in the Sixties, and so the Monoids, while still being front and centre of the action here, stop being so much of a focus-drag.

The audiobook by Paul Erickson manages to take a four-part story that always on screen felt like two two-parters knitted together (two episodes with the humans in charge, followed by two on a Monoid-run Ark), and expand it to feel like a valuable six-parter, with a long trial as the Doctor and Co are sentenced to death for bringing a fatal disease on board the Ark, and some exploring in different environments and biospheres to find vaccine ingredients, bringing a whole sub-plot about them being spied upon with it. There’s more texture to the novelization than ever made it on screen too – we learn how Monoid One came to power, which gives a rewarding reality to the revolution of the Monoids, and we also get a bit of backstory for Jackie Lane’s Dodo. As such then, The Ark feels like a more substantial story in the novelization than it did on screen, and its themes are given more time to expand and bed in. That said, despite feeling longer, it only occasionally begins to drag, and when it does, it’s in the excessively ‘talky’ sections, like the trial which, having seemed to condemn the Doctor, Steven and Dodo to death is then overturned in a handful of heartbeats, allowing the Doctor sudden and unexpected access to the Ark’s resources in order to try and cure the sickness Dodo has brought on board.

Peter Purves, on reading duties, is a joy, and as he does in most of his voice-work, raises the question of why he’s not in wider demand. As well as the straightforward business of voicing Steven, the companion he played in the story, he delivers a Dodo that makes you want to dig out more Dodo stories and watch them, and over the last decade, at Big Finish and BBC Audio, he’s been honing his version of the First Doctor to the point where it’s utterly believable and consistent, strongly anchoring stories that need a nuanced characterisation of the Doctor to hold them together. Even his Monoids sounds less distracting than the on-screen versions, helping you to get away from the visual of them, and making the run-time of this audio novelization fly by.

Pick up The Ark today, and either reclaim the story from your memory of its visual deficiencies, or experience it for the first time in probably the best way that will ever be possible.  Tony Fyler