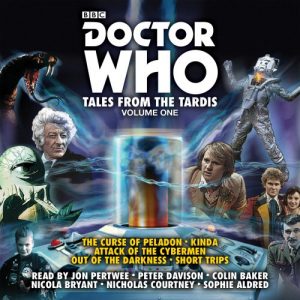 If you are new to Classic Who and you’re after a crash-course in some of the best of the original Doctors’ adventures in space and time, this bumper package is screaming out for your attention. It’s a proverbial Aladdin’s Cave of classic television adventures and previously deleted Short Trips read by the Doctors themselves, alongside their various companions. I’ll give you a quick rundown on everything that’s on offer here, bearing in mind that there is a LOT to cover, and I don’t want to bore you with a 20,000 word dissertation!

If you are already a fan of all things Classic and want to fill a few gaps in your collection, this gorgeous set of CDs is perfect for you, though you may find there’s something in your eye when you hear that the first story, as The Curse of Peladon is read by the Third Doctor himself. Here, he and companion Jo Grant find themselves on a primitive planet where they encounter a delegation of aliens, including the Ice Warriors and a personal favourite of mine – Arcturos: a gurgling, green wooden spoon with wool for hair that lives in a fish bowl on wheels. Seriously. Google it. He’s awesome.

Next up is a story regularly voted by classic Who fans as a favourite: Kinda. Read by Peter Davison, this is the story that is oft claimed to be a Buddhist parable featuring a massive serpent creating chaos at the heart of a paradise planet. It poses danger for the Tardis crew and a human survey team working on the planet Deva Loka, though my overriding memory is of Tegan with pink teeth. I’m not really selling this am I?

Let’s move on to the next story then: Attack of the Cybermen, read by Colin Baker and featuring everyone’s second favourite foes, who, this time, are intent on a plan to change history by crashing Halley’s Comet into Earth. This is the story that was very gritty, very dark, nearly got banned because it showed someone’s hands being crushed in all their bloody magnificence AT TEA TIME and had a laughably fat (Cyberman) controller. ‘Twas truly brilliant.

With the televised adventures out of the way, next up comes the short story Out of the Darkness, again read by Colin Baker and Nicola Bryant, followed by three really good original short stories also featuring the Sixth Doctor and Peri: Moon Graffiti  (where our heroes become caught up in one of humanity’s final fights for survival and have to battle against the all consuming power of the wonderfully-named Pararachnids), Wish You Were Here (an absolutely gorgeous story that sees the Doctor investigating the disappearance of an old friend in an alien holiday camp) and Vigil (wherein our heroes arrive in Hastings and hideous deaths begin to occur).

If this isn’t enough for you, then you’re clearly very discerning, or just very hard to please. So there’s more, starting with an early entry into the Short Trips catalogue read by none other than Brigadier Lethbridge Stewart and Ace themselves. Degrees of Truth by David A. McIntee is linked to the classic television adventure The Daemons and follows on from the Devil’s End incident. The Brigadier is contacted by Major Carver, the father of a young private who was vaporised by the gargoyle Bok (the chap with wings who had ‘6 rounds rapid’ fired ineffectually into him). Carver demands to know why his son’s body was never recovered, and, sympathising with his grief, the Brigadier allows Carver to accompany him to UNIT for a talk…with not-so hilarious consequences.

Other Short Trips include Freedom by Steve Lyons, featuring the third Doctor, Jo and UNIT and sees an army of hypnotised salespeople storm Stangmoor Prison attempting to rescue the Master (you’ll love this if you’re a fan of camp ’60s television series The Avengers). Glass by Tara Simms is a typically gothic Fourth Doctor and Romana story where an ordinary woman in Cambridge is haunted by the vision of an evil little boy’s face which appears to her in every pane of glass she sees (I LOVED THIS!). Model Train Set by Jonathan Blum is a beautifully quirky tale. The Eighth Doctor isn’t satisfied with his train set anymore and that’s because he is no longer the man he was when he built it…

Old Flames by Paul Magrs features my favourite of all the Doctor / companion pairings, the Fourth Doctor and Sarah Jane Smith. In typically bonkers Magrs prose, it sees The TARDIS materialize near an 18th-century manor, where the Doctor nearly drowns in a frozen lake while following the giant footprints of a cat. And finally (phew!) we have Stop the Pigeon  by Mike Tucker and Robert Perry, which sees The Doctor and Ace investigate a missing tree in a housing development in Croydon, where Ace is attacked by a terrified man who’s been transported through time twice for no reason.

There’s about nine hours of content here, and such a broad variety of tales, Doctors and companions on offer that there has to be something here that tickles your fancy. If there isn’t, then quite frankly, I despair of you.  Bex Ferriday