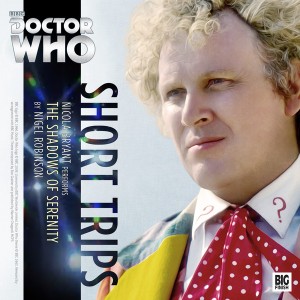 Doctor Who: Short Trips: The Shadows of Serenity – Written by Nigel Robinson & Narrated by Nicola Bryant – Download (Big Finish)
There are almost certainly a multitude of reasons why fandom, both individually and collectively, originally fell in love with, and still adore, Doctor Who. For me, it was, and has, always been about space and science fiction, about the myriad of different civilisations and planets that have become part of the Whoniverse and the endless possibilities that each offer The Doctor and his companions. So, it took less than two minutes for ‘The Shadows of Serenity’ to fully grab my attention, and within five I’d been baited, hooked and caught by Nigel Robinson’s story, which is, for all intents and purposes an old school science fiction story with a fairly hefty dollop of mystery thrown in to keep the plot racing along at an enjoyable, if a little hair raising at times, pace.

Landing on the planet of the warlike Malgarians, a race whose home world even the Daleks and Sontarans would think twice about invading, The Doctor is shocked to discover that they’ve suddenly become a species of pacifists, and in doing so, have somehow lost their shadows. Something doesn’t add up, and before you can say ‘Tardis’ backwards Peri and her travelling companion are left to try and return the Malgarians to their natural state before their planet is stolen from underneath them. Questioning the role that emotional development plays in everyday life and identity, while lambasting corporate involvement in genetic and biological research and evolution, ‘The Shadows of Serenity’ feels like it’s been cut from the same cloth as ‘Invasion of the Body Snatchers’, having the same slow build, long game objectives at its core, and employs the Doctor and Peri in an intellectual capacity rather than a physical one, which means no running down corridors, just intelligent story telling that’s well written and flawlessly narrated by Nicola Bryant. Tales like this, they’re the reason I still love Doctor Who… Tim Mass Movement