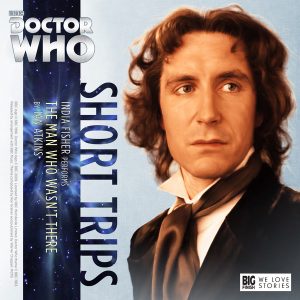 Doctor Who: Short Trips: The Man Who Wasn’t There – Written by Ian Atkins & Performed  by India Fisher – Download (Big Finish)

Charley Pollard wants to meet her childhood hero, famous Victorian explorer and blond Doc. Savage-alike, Pieter Monmarche. This should be simple enough when you’re travelling with a Timelord, so it’s a laconic and relaxed Doctor we meet at the start of The Man Who Wasn’t There, ever at the ready with a flask of tea and a blue scotch egg from Metebelis Three. Yet whenever the Doctor and Charlie arrive at a focal point in Monmarche’s timeline ready to shake hands, laugh nervously and ask for autographs…well, the great explorer just isn’t there.

The Doctor doesn’t seem too worried, but his excuses about the TARDIS materialising on the wrong date soon wear thin, and Charlie’s frustrations start to turn to fear. Soon enough, the Doctor and Charlie discover a dastardly plot that has unravelled the Earth’s future by changing its past. But where in history was the change made? And is it already too late to put it right?

This latest entry in Big Finish’s Short Trips series is one of those stories that take forty minutes to listen to, but days to stop chewing over. The Man Who Wasn’t There starts with a simple enough premise: sooner or later, the Doctor’s companion is probably going to ask the Doctor to travel back in time to meet one of their historical heroes. To be honest, if I were the Doctor, knowing that I’d already messed with things by tinkering with a fixed point in time such as Charlie Pollard’s fate, I’d be a little less relaxed about going back to meet one of her heroes, but hey. I’ll just have another of those scotch eggs and leave that here…

India Fisher narrates The Man Who Wasn’t There, which means that it’s going to be a pleasure to listen to, even if the story isn’t up to much. But don’t worry; it is. Despite its ‘timey-wimey’ foundation, the narrative never becomes bogged down in paradoxes or too much temporal twisting, so it makes sense from the start. This leaves Ian Atkins’ writing free to rattle along, cover the globe in an international game of hide and seek and wrap things up nicely all before tea. And while the story remains cohesive and coherently simple, it left me with some of those time-based ruminations us DW fans like to ponder in the wee hours.

What would be the repercussions in the future if the person you had idolised in the past had never existed? And why is blue food so unappetising? Bex Ferriday