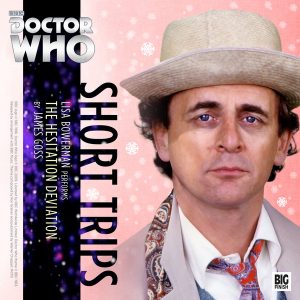 What is it with The Doctor and Christmas? As far back as 1965 he was getting it wrong and breaking the fourth wall when he shouldn’t be, and latterly he has fought off alien invasions and even succumbed to a regeneration on Christmas Day. Then there was that whole face-hugger-dream-making-suck-your-brain-out-crab-thingy a couple of years ago.  I’d hesitate to suggest that Christmas is not a good time to be The Doctor, which is pretty ironic as he seems to love it. Well, most of his regenerations do. I’d imagine that Nine wouldn’t have time for it, because it would be too trite and sparkly for him. Miserable sod.

Anyway, enough of the wittering. The Hesitation Deviation sees the Seventh Doctor throw off his season 25 brown suit and Machiavellian personality and seemingly return to his former metaphor-mixing, spoon-playing self.  He decides to take his travelling companion to a planet that does Christmas properly, where all talk of the festive season is banned until the festival approaches and where the denizens of the planet then go into full festive fever – snowmen, presents, mulled wine, mince pies, carols; basically, the whole kit and caboodle. So surely this time, on an actual Christmas planet things can’t go wrong?

Of course they can – otherwise this wouldn’t be much of an adventure. Told from companion Bernice Summerfield’s point of view, we are made aware that she has an awful decision to make. To save the Doctor she must go full Donna Noble and forget him forever. Indeed, she must retain no memory of him whatsoever, because on the Christmas planet a nasty trap has been set, and to know the Doctor is to want to destroy the Doctor. (Something I actually would be tempted to do if he even thought about getting those bloody spoons out…)

It’s always a treat to have a Bernice-centred story, and narrator Lisa Bowerman has never been better here. She captures the breathless, breakneck speed of the situation that Bernice and the Doctor find themselves in brilliantly, all the while instilling a sense of fun and urgency into a packed 35 minutes.  She also very ably manages to juggle two story threads which become nicely interwoven and provide a very satisfying pay-off too. And, like most Doctor Who Christmas specials, and despite what could have been a rather non-festive and tragic storyline, this is actually very lightweight, throwaway stuff, beautifully crafted by author James Goss.  It’s as Christmassy as the fortune-telling fish you always find in a cracker and as satisfying as a box of EAT ME dates, though I hope that the Doctor does, eventually, have a happy Christmas. Even if it’s for just a minute. (See what I did there?) Bex Ferriday