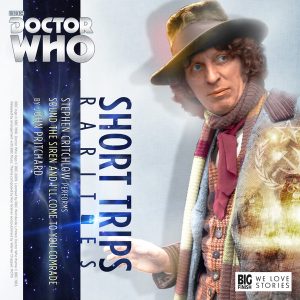 Sound the Siren and I’ll Come to You Comrade started life back in 2014 when it was released by Big Finish as a subscriber-only download. It is now available to non-subscribers as part of their Rarities series of Short Trips adventures.

Now, I love a recent history escapade, so was more than happy to listen to a story that begins with the TARDIS materialising on a scorched plain in the Soviet Union at the height of the Cold War.  And if this sets the scene, it would be logical to assume that this is a pretty dark story. As you’ll see, it is.

Upon leaving the TARDIS the Doctor and Leela discover high levels of radiation, twisted wreckage and human remains. These all indicate tests of a terrifyingly destructive power, but while the team responsible for this devastation live in terror of their political masters, something far more dangerous exists in the background, and this is something that they all need to be scared of.  And so it would appear that the human race has finally found a power that can light the universe. But can we handle such a power?

John Pritchard penned this wonderfully titled story, and writes a Fourth Doctor at his most louche and, conversely, most commanding. Jelly-babies and grins are proffered readily, but there’s an incredibly sharp mind at work throughout – you can almost hear ancient cogs grinding. Leela (as well as being given the chance to try on various outfits) is on hand to pile into the more visceral action, with a performance punctuated with familiar Eliza Doolittle and Henry Higgins interplay throughout. Because of the visual nature of this story it perhaps shouldn’t work on audio – but work it does, thanks to the vivid prose and the well-crafted setting. Stephen Critchlow’s performance must be mentioned too. He ‘does’ a brilliant Tom Baker. Not only does he replicate the unmistakable Baker timbre, he manages to capture that authentically laid-back, Bakeresque-charm in spades.  Watch out Culshaw, you have competition!

There’s little more to say. Add to all of this some beautifully written and delivered character moments towards the end (and to have supporting, one-off characters able to develop in a 40 minute time frame is an impressive feat), Sound the Siren will stay in your memory a long time after you have listened to it.  Bex Ferriday