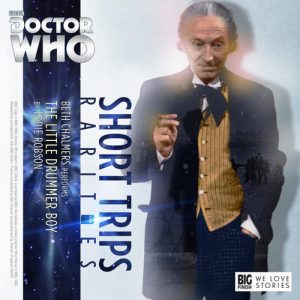 When Robert was eight years old, his twin brother Christopher died of cancer just after Christmas. Devastated, Robert’s father left the family, and shortly afterwards his mother took an overdose. When Robert found her dead in the kitchen, he wandered outside and found a crashed time machine. He climbed in and in doing so became linked to it, and when it asked him where he wanted to go he chose Christmas as this was the last time he remembered being happy. Obligingly, the machine took him through time to visit a great many Christmases.

On several of these journeys, Robert encountered a man called ‘The Doctor’ and his travelling companions  Steven Taylor and Sara Kingdom. Their intention was to outrun a race of monsters called ‘The Daleks’ by hopping in and out of time and space on a random course. They eventually found Robert inside his time machine, now a fully matured man in his thirties. They disconnected him from the machine, and after managing to get hold of the Taranium core stowed in the Doctor’s pocket, he, Benjamin Button-like, de-aged and was soon an eight year old boy again.

The Doctor took Robert back to his last happy Christmas, and here he took his brother’s place, before his father left and his mother died.

This is another in the ‘Rarities’ collection of stories that, initially, were only available to paying subscribers of Big Finish audio adventures. But sing huzzah, because now we can all listen to them! And it’s a rollercoaster ride. If you read my review of Lepidoptery for Beginners, you’ll see just how tonally, and emotionally different each story is. Lepidoptery was funny and Pratchettesque, while at its heart, The Little Drummer Boy is a story of grief and of the desperation we all feel from time to time to go back to a happier time. Eddie Robson: I love your writing, but this is heart-breaking!

Beth Chalmers also knocks this out of the park. It’s a typically male-centric Doctor Who story, but she adds gruffness and bluster to Steven, and a fascinating, almost reptilian flavour to the First Doctor, which works beautifully – I’ve always thought Hartnells’ Doctor to be a bit lizard like in word and deed, and this comes across beautifully.

The Little Drummer Boy also gives the audience an opportunity to find out a little more about early companions Steven and, more especially, Sara Kingdom. In her very brief stint as a companion, we saw a Space Security Agent who was by turns aggressive, independent and ruthless. Here she is new to the TARDIS, and is unsure of herself and her surroundings, nervous of her new role as part of ‘Team TARDIS’ and concerned about the Daleks catching up with her. I like Sara Kingdom. I wish we’d had more time with her. For now I guess, this will have to do. Bex Ferriday