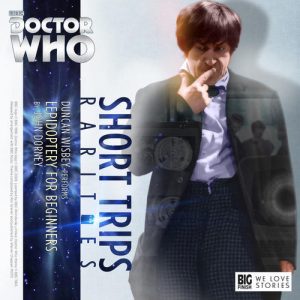 “My name is Iolas Blue and…er… I want to kill you all. Sorry about that!”

Lepidoptery for Beginners introduces the audience to one of the best Doctor Who villains I’ve encountered for a while: a socially awkward young genius with a neatly itemised checklist, a flipchart and a wonderfully named supercomputer that can predict and ultimately manipulate the future. All of this is very handy as Iolas Blue knows that the Doctor will one day defeat him, and now he can kill the Doctor before getting on with the job of ruling the galaxy. Tick box number 235: checked.

So how does the Doctor outsmart an enemy who can anticipate his every move?

You may have already guessed that this is one of Big Finish’s quirkier stories, and you’d be right. It’s a wonderfully two-toned tale, and narrator Duncan Wisbey, though always aware of the comedy that drives the narrative, knows that a rather dark parable lurks underneath the laughs, so never gives into the temptation to overplay his role. He also makes the story that bit more immersive by presenting the listener with a spookily accurate interpretation of a Second Doctor who moves from mild irritation to abject despair within the space of half an hour. Of course, a good impression of Patrick Troughton does not a decent story make.

Thankfully, writer John Dorney completely understands the Doctor, his companions and the more surreal stories aired occasionally in the days of black and white television. There are vigorous nods to Douglas Adams in Dorney’s writing style from the get-go, but if you’re not a fan of humorous writing don’t let that put you off. At its heart is an intelligent story, and while the villain’s awkwardness creates many opportunities for humour, it never descends into farce. Underneath references to Mr Tickle and the horror of the Boy Scouts is a complex but satisfying examination of free will and responsibility, and if you like a twist in the tale you won’t be disappointed. I didn’t see that ending coming, and it’s actually a rather satisfying conclusion. Bex Ferriday