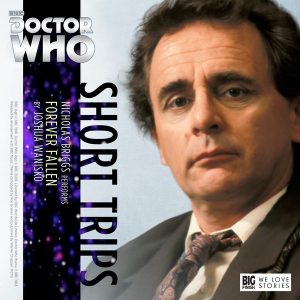 Rather surprisingly, Forever Fallen isn’t really a story about the Doctor, nor is it about the inevitable defeat or comeuppance of a villain. There’s no racing along endless corridors, no laser blasters and, as Sidney Newman would have wanted, absolutely no *BEMs. Nope. At its rather gooey core, this story is about the willingness to believe in the goodness of humanity and the path one man must take towards redemption. But don’t let the lack of familiar Doctor Who tropes put you off – for this is a real gem of a story. And the real star of the show isn’t Doctor number seven, nor is it ASBO-dodging companion Ace. It’s writer Joshua Wanisko who runs away with this, not only by capturing perfectly the Seventh Doctor’s voice, but (more importantly) by writing a truly captivating story.

Year by year the Doctor and Ace return to the same place and observe the changes in central character Iain Calvin’s life and personality, and it’s here that Wanisko does a brilliant job of giving Calvin a full, satisfying arc within the confines of a 30 minute story. Indeed, Iain Calvin is arguably more developed as a character than many of Doctor Who’s villains. The changes in tone, year by year, are beautifully captured, but it’s really the Doctor’s speech to Ace at the end that gives this release a gold star.

Ultimately, Forever Fallen is about Calvin’s growth and a particular decision he has to make. The choice he makes is something of a genius move, and the implications it may make in the future could even be the best part of the story.

And it’s not just the author who rocks this. You can always rely on Nicholas Briggs to do a brilliant job, and as ever, he doesn’t disappoint. His take on the Seventh Doctor is pitch perfect, he gives variety to Ace’s voice, and his main performance as Iain Calvin is sublime.

All in all, this has everything us Short Trips fans need to keep us happy. It has a well-drawn central character and an ending that is pitch-perfect. Joshua Wanisko delivers an absolutely blinding story, which really captures the tone of the characters, and writes with surprising depth which, because of time constraints if nothing else, is something that I don’t usually expect from the Short Trips range.