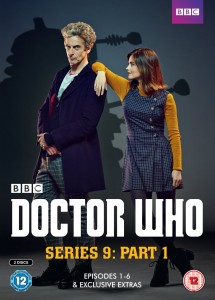 When I first became a fan of Doctor Who, back in the mists of time (otherwise known as the late seventies), it was a show that thrived on its Marmite-like appeal. That is, you either loved it, or you hated it. If you loved it, you really loved it and if you hated it, you really hated it and made the lives of your peers who did love it absolutely miserable by ridiculing their devotion to it. Being a Doctor Who fan when I grew up was a pretty tough gig, and so when the Doctor finally returned to television and was greeted with universal acclaim instead of mockery, I honestly thought the Doctor’s future would glow in the rose coloured light of a million erupting stars for all eternity. I should have known better.

Peter Capaldi’s Doctor, has unlike any other before him (except for maybe Sylvester McCoy’s initial run as the Seventh Doctor), polarised the opinions of fandom. It’s now the die-hard, long-in-the-tooth, there from the days of the classic show fans that have embraced the marmite approach to their once magnificent hero. Having neatly divided themselves down the middle, half of the long established Whovians continue to extol his virtues and those of the show, while the other half repeatedly call for the heads of the Twelfth Doctor and the show runner, Steven Moffat while bemoaning how both have completely ruined the show. And it’s this series, Series Nine, more than any other, that has seen both sides become even more entrenched in their attitudes toward, and about, the Twelfth Doctor and Doctor Who. Me? I’m somewhere in the middle, which is a pretty uncomfortable place to be while the venom, vitriol, platitudes and praise are constantly setting the air around you alight. But that’s where I am, and this is why.

As stories go, the first half of Series Nine hits the ground running with a trio of two part adventures that crank the adrenaline pump until the handle breaks off. Opening with ‘The Magician’s Apprentice’ and ‘The Witch’s Familiar’, The Doctor is thrown, along with Missy and Clara, into the lair of his greatest foe, The Daleks. Lured to Skaro in the belief that Davros is dying, The Doctor soon discovers that some things, especially mechanised killing machines, never change and he ends up caught in a web of treachery, betrayal and deception, which when you’re facing the Daleks is pretty much par for the course. Incorporating the ultimate time travel dilemma and one of the most touching and well realised moments in the shows long history, it’s a tale that hits all the right buttons and would have been a glorious home run had it not been for two things. The sonic sunglasses and the Doctor suddenly developing an affinity for the guitar both of which feel like some strange attempt to reinforce the Doctor’s “cool factor” and are completely unnecessary. He’s not some misunderstood, bad boy, rock-n-roll outcast, he’s The Doctor. He doesn’t hide away and pour over riff after riff, he’s the oncoming storm and when all hope is lost, he’s the last man standing between chaos and light. He saves creation, that’s what he does.  He doesn’t play Queen songs while straddling the barrel of a tank’s gun. Although, admittedly, the tank was a nice touch, but given the Doctor’s long standing feelings about guns, was a little out of place. That said, the episodes themselves are a wonderful exploration of the fine line that separates love and hate, and the darker side of the Doctor’s nature.

The base under siege scenario has always been a staple of Doctor Who, and ‘Under the Lake’ and ‘Before the Flood’ employ, and exploit, the idea to its fullest in a plot involving ghosts, alien warlords and the laws of time travel, and what it truly means to be a chrononaut. Gripping, involving and filled with incredible characterisation and flashes of brilliance (the cards fitting perfectly with the Twelfth Doctor’s personality), it’s another stand-out moment that wouldn’t have felt out of place during the Fourth Doctor’s tenure. Or at least it would have had it not been for the sonic sunglasses. I can’t help it, I hate the sonic sunglasses. It’s a screwdriver; it isn’t a pair of value specs from Aldi. However, that isn’t the only problem with these episodes, if it was, it wouldn’t even be an issue. No, the real bugbear is the Doctor’s relationship with Clara. See, the thing is, the chemistry that’s supposed to exist between the Doctor and his companion’s just isn’t there and where there’s supposed to be warmth and closeness, it feels, at times, like there’s an ocean between them. Maybe that’s because one minute Clara is a go-getting, no-nonsense problem solving modern hero and the next she’s all a-quiver, whimpering and crying for The Doctor to save her.  Is she the Doctor’s companion, or is he hers? It’s a problem, and it’s the elephant in the Tardis that no-one seems to want to talk about. But try as it might to throw a spanner in the works, it doesn’t stop the stories being enjoyable. Which they are. And then some.

Which brings us rather neatly to the final duo of dramas in the first half of the season; ‘The Girl Who Died’ and ‘The Woman Who Lived’, which are among the strongest  of Twelfth Doctor stories, and certainly the best of this series so far. With Vikings, alien warlords pretending to be gods, battles, and a little time-lord magic, ‘The Girl Who Died’ is classic Who by numbers, and it feels like the series is finally hitting its stride. Maisie Williams is phenomenal as Ashilda / Me, and the tragic cliff-hanger that feeds directly into ‘The Woman Who Lived’ is beautifully realised. Talking of ‘The Woman…’, it’s essentially a two-hander in which The Doctor and Me begin to come to terms, and learn to deal, with each other as the ramification of the Doctor’s actions at the end of the previous episode finally dawn on him. A tale of highwaymen (and women) and prospective alien invasion, it gallops along while allowing the strange association that exists between the main players to slowly, but surely, develop and aside from the slightly poorly realised wolf in sheep’s clothing baddie of the week who I kept expecting to tell everyone about his belief in spooks, it’s an imaginative, intelligent slice of good fashioned Who-filled drama.

So, there we go, that’s why I’m stuck in the middle of fandom’s opposing forces. When it’s good, it’s very, very good and when it’s bad, well it’s not horrid, but it does feel almost like it’s treading water and grasping at ill-thought ideas and concepts (like the sonic sunglasses) to bolster stories that just don’t need it. They’re strong enough to stand on their own. Could it be that Doctor Who has fallen victim to the plague of trying too hard? Is that the problem that lies at the heart of the show? That it’s trying too hard to please everyone instead of focusing on its already established, and already huge, fan-base? Only time will tell. Until it does though, we’ll just have to make do with these episodes. Which isn’t all that bad, as they’re really rather good…  Tim Mass Movement