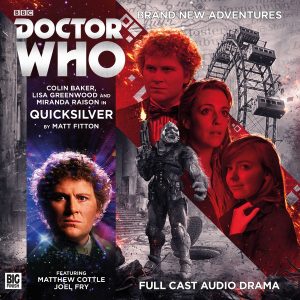 And so following the harrowing events of Absolute Power and in the wake of the not-so unrequited attentions of a rather amorous ally, Mrs Clarke decides that it’s time to return to active duty and head home and so asks the Doctor to take back to London and the war. The thing is though, travel not only expands one’s mind and perceptions, it also tends to create a rose tinted image of the places and people that you left behind, and distance and the passage of time also weave their magic on the things you left behind. Nothing stays the same, everything changes. Which Constance discovers when upon arriving home, she’s confronted by the tragic news that her husband has been lost in action. But his companion isn’t the only one who knows that the Doctor is back in London. Someone has been watching and waiting for him to return, and while Mrs Clarke begins to grieve, the Doctor is confronted by a surprise visitor who might just be unwittingly responsible for changing the course of human history.  Being the stickler for non-interference that we all know him to be (ahem), the Doctor along with his new found “friend” and Constance, looking for anything to distract her from having to deal with the situation she’s found herself in, in an attempt to right the wrongs of said “guest”, fires up the Tardis and heads into the vortex to fix the potential disaster before it can wreak all manner of havoc on time and space.

Jumping four year into the future and arriving in post war Vienna, the trio of intrepid heroes soon find themselves entangled in a vicious web of warring aliens, misappropriated and misused technology, the rather pleasing return of a not so old acquaintance, all manner of surreptitious espionage and underhanded deals and a rather delicate, extremely embarrassing and most unexpected personal situation.  And the whole thing is fantastic.  Like The Third Man but with great big laser guns, invading monsters, lots of corpses and destruction on a near biblical scale, Quicksilver is responsible for creating its very own genre, the cold war pulp science fiction relationship drama, one in which it is the sole resident. Dripping with brilliant observed and realised characterisation and action, Matt Fitton’s rippingly good yarn provides the cast with a diamond hard platform upon which to work their craft and they do so with gusto and glee in this terrific tale that manages to maintain a stiff upper lip while reversing the periods gender politics and roles and preventing Earth from becoming an “innocent victim” in somebody else’s war. Jolly good stuff… Tim Cundle