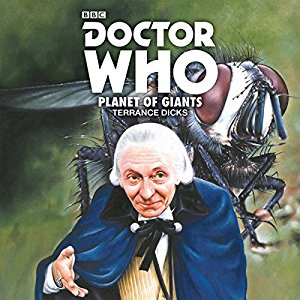 Since its inception, Doctor Who has often slipped in a subliminal moral message here and there, the odd political opinion now and then and a healthy dose of environmental awareness. Planet of Giants was probably the first such episode to do this, airing early in 1964.

Always ahead of its time, the threat in this story comes in the form of pesticides with the power to destroy all life forms. The first Doctor and his companions must find a way to stop this threat, but as in all good disaster movies, there is always a mad scientist intent on seeing his work complete. Having made several failed attempts to take Ian and Barbara home, the Doctor is confident that he’s finally nailed it and landed the Tardis back in London in 1963. Only the Tardis door opens to reveal that that they are now in fact one inch tall and once harmless flies and cats, now pose a serious danger, if they weren’t dying off at an alarming rate that is. Meanwhile the Ministry, while trying to put a stop to the production of the deadly toxin comes across the inventor, who will stop at nothing to see it succeed.

Credibility is added to this first Doctor adventure by Carole Ann Ford, who played the Doctor’s granddaughter Susan Foreman from 1963 to 1964, who does a commendable job in bringing this novelization to life. For those already familiar with the episode, it’s worth picking up, if only for the pieces reinstated from the original four part version. If you are not familiar with the episode, then this is a good place to start. Classic Who! Chris Andrews