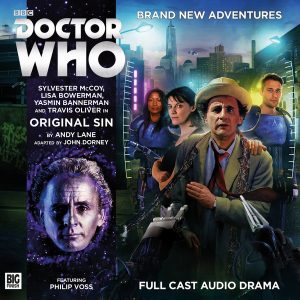 The last words of a dying alien send the Seventh Doctor and companion Bernice Summerfield to thirtieth-century Earth in an attempt to avert an unspecified disaster. They materialise and are soon arrested by a group of space police called the Adjudicators. Their attempts to prove their innocence (and escape a death sentence) take them from the mosaic planet of Purgatory to a prison inside a star.

Meanwhile, Adjudicators Roz Forrester and Chris Cwej have their own problems. Investigating a series of apparently motiveless murders, they have stumbled upon a conspiracy with sinister overtones. On the run and out of luck, the only people they can turn to are their chief suspects…who just happen to be the Doctor and Bernice.

And, as is the way of such tales, someone is watching them. Someone who knows the Doctor of old…

The New Adventures series of novels filled the void left by Doctor Who when it was off our screens in the nineties but, to be fair, were something of a mixed bag. They promised original stories that were more adult in tone, but often felt a bit hit and miss, the ‘adultness’ of the stories often at odds tonally with what us fans were used to seeing on the television.

So I am happy to say that Original Sin is most definitely a hit. For a start, it’s a good old-fashioned planet-hopping space opera, but more than that, it looks to the future, by introducing us to two new companions, and to the past, by bringing back a memorable villain that we haven’t seen since the days of black and white. More than that, John Dorney’s adaption brings the world of the 30th century to life in a level of detail that many simply couldn’t match without neglecting character or plot. Within seconds I found myself sucked into the future (not literally. I’m not a Timelord), but if the cast list isn’t right then a well-written adaption does not always make for a good audiobook.  Panic not dear reader – every single member of the cast is fantastic. Sylvester McCoy is clearly having a ball; he’s all rolling ‘r’s and mercurial energy, and he slips back into that familiar question mark sweater as if he never taken it off. The rapport between him and Lisa Bowerman as troubled companion Bernice Summerfield zings, and new companions Roz and Chris are immensely and immediately likeable. They’ve been written well, but are brought to life and played beautifully by Yasmin Bannerman and Travis Oliver. More of these two please!

Before I finish, an admission. I’m not a massive fan of the Seventh Doctor, and was always a bit ‘take it of leave it’ when it came to those New Adventures. Reviewing this didn’t fill me with Yuletide excitement, but as my empty wardrobe will attest yet again I have been forced to eat my hat. This is a glorious adaption of an uncomplicated yet exciting novel. I’m going to listen to it again, and urge you to do the same. Bex Ferriday