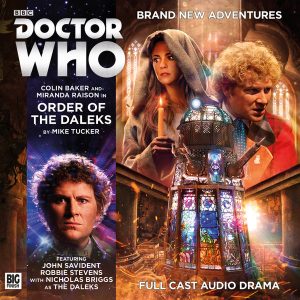 Not that this has anything to do with the above story, but I’m a massive Colin Baker fan. Always have been and always will be and I still get mildly irked when thinking about the rough deal he had when he was the incumbent Doctor on television. Old Sixie was, and is, a fantastic Doctor which he proves yet again in Order of The Daleks. In this story he’s joined by another television legend in the form of John Savident, also known as bonkers butcher Fred Elliott from Coronation Street, who plays a pompous officious, red tape bound planetary assessor, and he is, as you’d expect, marvellous in the role. Events quickly come to a head in Order of the Daleks as the Doctor and Constance land on the feudal planet Strellin and end up visiting an Abbey that, as well as being home to a peace loving order of Monks, also harbours a dark and deadly secret.

The Daleks, having crash landed on Strellin, waste no time at all, forcing the abbey’s inhabitants into subservience as they hatch yet another plan to take over the cosmos. It’s left to the Doctor and his friends to stop them and their latest nefarious scheme, while contending with possessed monks and a very devious Black Dalek.

The Order of the Daleks is a magnificently executed adventure in which the cast are in fine form, particularly Miranda Raison as Constance and Olivia Hallinan who plays Junior Assessor Asta. But, as enjoyable as Order of the Daleks is, one of the things that really stood out, and remains locked in my imagination is the way in which the Daleks use the stained glass windows of their new base of operations as… No, wait, let’s not talk about that because, you know, no spoilers. Scary, funny and imbued with Gothic horror, the Order of the Daleks sets the Doctor against his second greatest (because, let’s face it, The Master is still his numero uno nemesis) enemy in an original, imaginative and gripping story that stays with you long after it’s finished. It’s time to join the Order… Nath Rixon