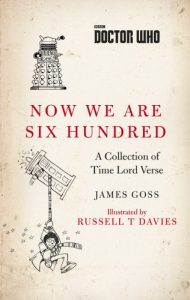 I cannot think of anything worse,

Than reviewing books comprised of verse,

I do not know what I should do,

As I’m not a fan of Winnie the Pooh.

So I take a look, my face a sneer,

And surprise surprise, (now this is queer),

I’m reading this without a niggle,

Indeed, these poems are making me giggle!

These rhymes don’t have a bear named Pooh,

They’re about a chap called Doctor Who!

With pictures I could watch for ages,

Here’s a poem about bow ties,

Eleven loves these (I don’t know why),

But the rhyme is written to look like a tie,

And here’s a story about Harriet Jones,

I thought the Daleks had zapped her bones,

She managed to leg it and ran away,

So she can be PM one day!

James Goss, I admit, your poems are Ace,

They tell great stories of time and space,

So buy this book, it’s loads of fun

But if you’re a Dalek…basically…RUN!