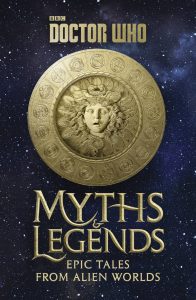 Like your classic mythology with a Doctor Who twist? Then you’re going to love this collection of well-known myths, rewritten with a distinctly Whovian flavour. Greek mythology fans are going to be particular chuffed, as most of the short stories that comprise this beautiful new tome from the BBC have been taken from their Grecian origins and re-worked beautifully. The Trojan Horse? Check. Jason and the Argonauts? Check. Hercules and the Hydra? Check. They’re all here, packaged with a distinctively sci-fi twist, so whether you’re a classically trained Whovian or a newbie (‘Whobie’?), there’s something for everyone. So let’s indulge in a quick (spoiler-free) run-down.

I’ll be honest: our favourite massive-collared cosmic jobsworths and renowned filibusters the Time Lords pop up frequently, and while I find them, as a race, about as exciting as watching laundry dry, each Time Lord-based tale still manages to focus on a different monster from the Doctor Who universe. Fans of classic Who will appreciate appearances from lesser known foes like the Jagaroth and the Great Vampires, Favourite Fifth Doctor foe, the Mara also slithers into the story of Medusa, while Sutekh the Destroyer from fan favourite Pyramids of Mars gets a mention in The Riddle of the Sphinx. And panic not Nu-Who fans – there’s plenty for you too. The Weeping Angels make an appearance in The Angels of Vengeance, and we even get the Racnoss taking on the role of the Minotaur. It’s a wonderfully eclectic mix that caters for fans of all ages, much like the show it’s based on.

There are a handful of stories that segue and, in doing so, expand upon series 10 too. The Cybermen are back to wreak havoc in The Mondas Touch, a brilliantly realised reinterpretation of the King Midas legend, and if World Enough and Time and The Doctor Falls hadn’t already fulfilled Capaldi’s inner fanboy, the Twelfth Doctor pops up to save the day here too. Having said that, our favourite renegade Time Lord (with the ill behaviour, with the ill behaviour) doesn’t intrude too often on proceedings and Myths and Legends is actually all the better for it. It’s nice to have some spin-off material that doesn’t need to constantly fall back on The Doctor in order to make it appealing.

The timeliness of this release doesn’t stop there, either. If Empress of Mars whet your appetite for the Ice Warriors, you’re in for a treat. The Martian marauders face off against the Daleks in an excellent take on the Daedalus and Icarus myth. It’s a delight to finally see these two long-serving giants butt heads. Plus, we get even more additions to Ice Warrior canon via Ice Lords and Ice Ladies. The acknowledgements at the back of the book suggest the author was privy to a few Series 10 secrets, and the influence is clear to see. It’s refreshing for a release to be so up to date, and so soon.

One of the best stories features The Master-and I say this as someone who has always felt a bit ‘meh’ when it comes to the Doctor’s fellow Gallifreyan and Bête Noir (who I always thought was a bit over-rated). I really enjoyed the story told from Lucy Saxon’s perspective as she visits her husband’s past – and future – incarnations. While it’s fun to see the Delgado and Ainsley Masters get a nod, the real surprises come when Lucy meets Missy. However, my favourite story, Jorus and the Voganouts, clarifies something that’s been bugging me since I first saw Revenge of the Cybermen…

…all of this is packaged in beautiful hard-backed, slip- covered gorgeousness, with each story illustrated by Adrian Salmon as the proverbial icing on this literary cake. The minimalist monochrome style gives each drawing a distinctive edge, striking a clever balance between the recognisable and the mythical. In fact, they’re not a million miles away from the sort of thing you might expect to find on some ancient Gallifreyan pottery somewhere among the stars.

Myths and Legends takes everything we already love about mythology and regenerates it with newfound purpose. And I bet my last cheese sandwich you’ll be able to find at least one story in here that piques your interest.  Bex Ferriday