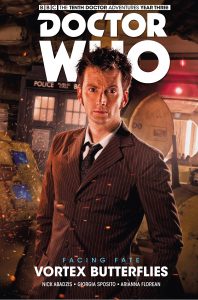 I’m going to have to start this review with a couple of admissions, either of which may see me thrown out of ‘the fandom’ for good. Number 1: I don’t read Doctor Who comics. Number 2: I’m not a fan of the Tenth Doctor.

There. I’ve said it. And I feel somewhat better for having done so.

It does mean that when I started reading Tenth Doctor adventure Vortex Butterflies, I knew nothing of the world in which it was set, nor of the Doctor’s travelling companions, Cindy Wu and Gabby Gonzalez. And because I hadn’t read the previous adventures, was catapulted into this story feeling the way a casual viewer of Doctor Who must do after rejoining the television series during the Matt Smith years. That is to say, totally and utterly confused.

So, a Doctor Who comic book based around a Doctor I don’t much care for, and in the middle of events of which I have no prior knowledge, with two companions I’ve never heard of. The phrase ‘Brave heart, Tegan’ springs to mind…

…but I persevered – I have to as I agreed to review this – and am glad I did. Because despite the first few ‘previously in Doctor Who’ pages that confused me entirely –(Cindy is her own great, great great grandmother with 500 clone daughters? Eh?), this settled into a story that doesn’t necessarily require prior knowledge to understand or enjoy. Having the Twelfth Doctor make a guest appearance (and I love the way he refers to his former self as ‘Bambi’) is the sort of multi-Doctor fan-wank we all love, and who doesn’t punch the air when Sarah Jane Smith turns up to help save the day?

After leaving ancient China (the setting for the last adventure. I think.), the Doctor, playing down what must be an absolute bloody ‘we’re all going to die horribly’ emergency in a way only the Doctor can, notices that the TARDIS has developed hiccups, so does what he always does: flies the TARDIS to 2009, materialises in a house he owns in London, tells his suspicious companions that he’s ‘dropping them off for a while to have some ‘time to relax’, and then buggers off on his own. Gabby isn’t fooled and knows that the Doctor is purposely leaving them behind so he can investigate whatever is wrong with the TARDIS, but after only a matter of hours, she has suddenly fallen foul of a strange aura and a flock of glowing butterflies. Cue the arrival of Sarah Jane Smith and the start of a  multi-part story that takes place simultaneously in London, and on a couple of un-named planetoids.

Vortex Butterflies is immensely readable, and in more ways than one. Yes, it’s an enjoyable and engaging story, but writer Nick Abadzis fills speech bubbles sparingly, letting the beautifully clear and simple artwork from Giorgia Sposito and Iolanda Zanfardino do much of the story telling. This suits me, as I find comic book panels often have such a mass of images and text vying for the reader’s attention that it can be hard to keep track of the story, and to find any context between one panel and the next. Abadzis uses deft turns of phrase too – I love the idea of ‘The Sutekh Survivors’ Club’, and the immediate warmth and friendship between Gabby, Cindy and Sarah Jane Smith is almost palpable. There’s also a pleasing juxtaposition between alien goings on with the Doctor and the TARDIS, and the more homely, domestic setting of the companions’ side of the story. And I like that, because Gaby is an artist, we see her blog-like drawings presented as a comic book within a comic book.

I’m tempted to go back and catch up on Gabby and Cindy’s past adventures with Ten, and to see where this particular story leads. Bearing in mind my earlier admissions, I’d say that this means that I’m giving Vortex Butterflies a thumbs up. Bex Ferriday